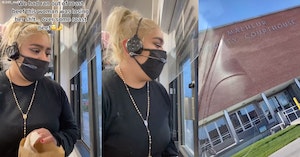 Whether we’re in the middle of a pandemic, or finally coming out on the other side, one thing remains constant—service workers are always going to get treated poorly by entitled people who can’t be bothered to think beyond themselves.

An Arby’s employee has gone public with her experience dealing with an irate customer who couldn’t handle the fact that the fast-food chain ran out of roast beef.

Mari Diaz, who goes by @345_mari on TikTok, uploaded a video taken as she worked the drive-thru at a location in Oregon.

“Alright, ma’am, I’m really sorry about that,” she tells the off-screen customer. “Don’t worry about the fry, it’s on us.”

It’s impossible to make out the other half of the conversation, but according to Mari, the woman responded by asking “how the f—k” Arby’s is out of roast beef, though the TikToker’s text caption explains the incident took place on their first day reopening so they “went through more roast than expected.”

She hands the customer the bag with the large fry she ordered through the window and turns back to grab some sauces for her. When Mari comes back and opens the window once more, sauces hurtle through as the woman attempts to throw her whole bag at her before yelling “f—k you” and driving off.

It’s not the first time an angry customer has overreacted to something outside of an employee’s control, and it certainly won’t be the last, but this story does have a twist to it—Mari says she pressed charges.

A witness reportedly took down the woman’s license plate number, allowing Mari to file a report and take the woman to court. She says she was charged with assault and is no longer allowed to come back to that Arby’s at all.

She also said the woman tried to apologize to her before court, but Mari just wasn’t interested.

“Fast food is probably the worst job that anyone can have,” she said. “It’s easy, but you just have your days like that where people are gonna test you, and you just have to take control of the situation and not flip out on them.

“It takes a lot of patience to be in fast food, because you deal with a lot of stupid people.”