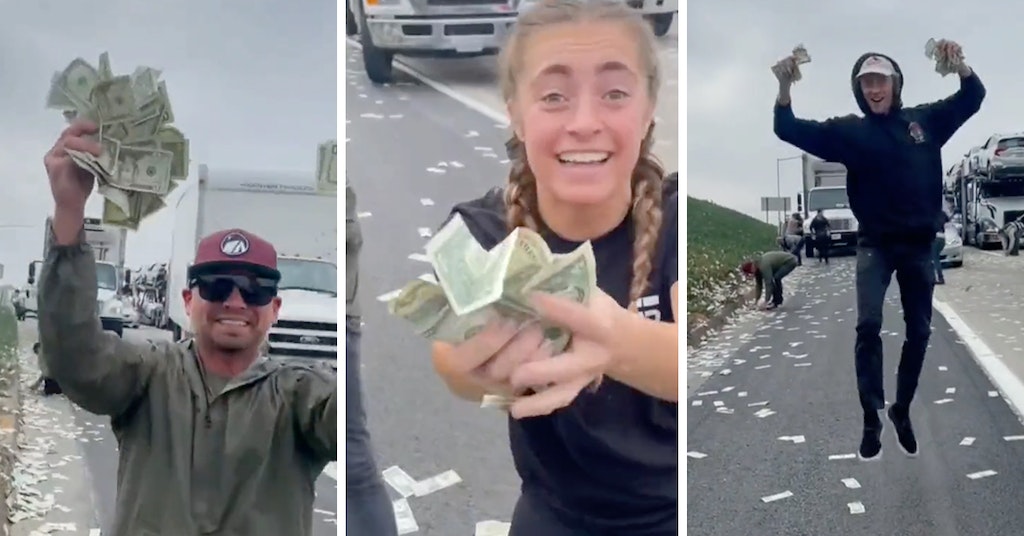 A San Diego freeway was briefly shut down on Friday after an armored truck carrying a load of cash managed to spill it all over the road, sparking a frenzy as drivers pulled over to try to make a little easy money on their morning commute.

California Highway Patrol (CHP) Sgt. Curtis Martin told The San Diego Union-Tribune that several bags of money fell out of the vehicle after one of the back doors somehow popped open while driving down the highway.

“One of the bags broke apart, and there was cash all over the lanes,” he said.

A video of the aftermath went viral, showing cars stopped along the freeway and people scooping up the money for themselves.

But just because something spills doesn’t mean it suddenly belongs to whoever grabs it up first, and the exciting escapade didn’t end too well for at least two of the people who decided to pad their own wallets with the free-floating cash.

While most of the grabbers had already cleared the scene by the time police arrived to deal with the situation, two people had locked themselves out of their car in their excitement. They were subsequently arrested.

Another CHP officer, Jim Bettencourt, warned that others who don’t return the cash are at risk of being arrested and charged as well.

“If you stop to pick up money, as many people as videoed the scene, you can possibly be facing charges,” he said.

And Martin suggested folks who left with any of the primarily $1 and $20 bills that flew out of the truck go ahead and return it to the police. Surprisingly enough, the CHP reports that around a dozen people returned money they found on the same day.

But people online were still deeply amused by the situation, and the viral videos taken at the scene.

It’s unclear how much of the money is still missing, although the total that fell out of the truck was reportedly under $1 million.