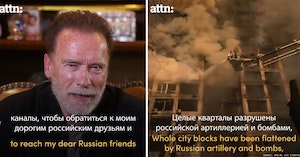 Actor and former California governor Arnold Schwarzenegger issued a near 10-minute statement directly to the people of Russia encouraging them to stand up to Vladimir Putin and oppose the invasion of Ukraine, while debunking Kremlin misinformation. He further praised the everyday Russians who have already done so, lauding their incredible bravery in the face of the high risk of imprisonment and persecution, calling them his “new heroes.”

Schwarzenegger evoked both his love for the Russian people as well as his own experiences with his father, who fought as a soldier in the Nazi military during WWII and how he was used up by the German government, left “broken, physically and mentally.”

“He lived the rest of his life in pain,” Schwarzenegger said. “Pain from a broken back. Pain from the shrapnel that always reminded him of those terrible years. And pain from the guilt that he felt.”

The effects of Nazi propaganda lingered for many years, causing conflict between young Arnold and his father, who demanded he take down a photo of Russian weightlifting champion Yury Petrovich Vlasov and admire someone either German or Austrian instead.

But Arnold refused, having obtained the photo on a trip to meet Vlasov, his hero at age 14, at the 1961 World Weightlifting Championships.

“Because it didn’t matter to me what flag Yury Vlasov carried,” said Schwarzenegger in the video.

He later met Vlasov yet again in Moscow while filming Red Heat, further cementing his love of Russia and its proud citizens.

With this background, Schwarzenegger implored Russian civilians and soldiers alike to believe him when he says that the assault on Ukraine is wrong, that the Russian forces are killing their own siblings and that the footage of bombed homes, hospitals, and schools is real.

“That is why I hope that you will let me tell you the truth about the war in Ukraine and what is happening there. No one likes to hear something critical of their government, I understand that. But as a longtime friend of the Russian people, I hope that you will hear what I have to say.”

He further denounced the false Kremlin claim that the invasion was an attempt to “denazify” Ukraine, which does contain some neo-Nazis (don’t we all) but is led by a Jewish president and populated by people of all kinds who only want freedom for their country.

“Ukraine did not start this war, neither did nationalists or Nazis,” he said. “This is not the Russian people’s war.”

Interestingly, Schwarzenegger is one of just 22 people followed by the official “President of Russia” Twitter account, along with billionaire and world’s most irritating man Elon Musk.

The video earned Schwarzenegger widespread acclaim among the countless people worldwide who stand against Putin’s war.