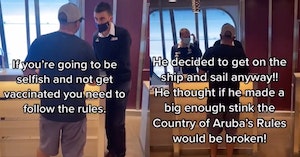 It sometimes seems like the whole world has gone crazy, but that might just be because you’re in the U.S., where people think they’re taking a stand by refusing a life-saving vaccine. In other countries, there are very different approaches to COVID-19 and what needs to be done to keep the population healthy and alive.

For instance, in Aruba, no one who is unvaccinated is allowed into the country. Lots of people try to pop in and out of Aruba, especially Americans on cruise ships. Not to stereotype, but people on cruise ships can often be the worst and I got the TikTok to prove it.

Originally posted by @guadgoes on TikTok before making its way to Twitter, it shows a male “Karen” freaking out on some poor cruise ship employee because he can’t just bully his way onto the island.

In the captions over the altercation, the TikTok explains that it is Aruba’s policy, not that of cruise ship. Ticket holders were told this again and again and again before launch.

The cruise line even offered passengers a refund of 125% if they didn’t want to go after finding this out. And this guy decided to go anyway and try to act like the rules don’t apply to him—and when he heard “no” he flipped.

“If you’re going to be selfish and not get vaccinated you need to follow the rules,” the TikTok concludes. The clip was stitched by @Chrisflying, who is a flight attendant that posts a lot about his job, and he affirmed that this sort of stuff happens all the time:

It’s almost satisfying to see this guy try to make things work the way they always do for him in America and get turned away. But then you gotta think about how many of these people the employees on cruise lines are having to deal with every single day. They deserve hazard pay.