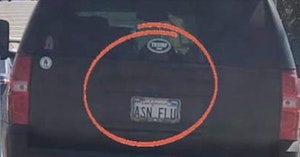 A California license plate has caused quite the outrage over the continued disparagement of Asian Americans in relation to the COVID-19 pandemic.

At the end of March, a photo began circulating online that features a vanity plate reading “ASN FLU.” According to one Facebook post, the vehicle was spotted around the city of Corona in Southern California. There is also a “Trump 2020” sticker visible in the back window.

“This is why calling it the ‘China Flu’ or ‘King Flu’ is so dangerous,” a post sharing the photo reads. “Now it’s just the ‘Asian Flu.’

“People like this aren’t just ignorant, but they actively spread hate. Hate which has lead to the surge in violence against Asians. If you know someone who thinks this is ok, please say something.”

After COVID-19 became a threat in the United States, then-President Trump became insistent on referring to it as the “Chinese virus,” prompting supporters and some fellow Republicans to follow suit.

Research has already linked the rise in anti-Asian rhetoric and violence across the country to Trump’s decision to push a racist agenda in an attempt to draw attention away from his own egregious mishandling of the pandemic.

In this particular case, while it appears the owner of the vehicle is both pro-Trump and racist against Asians, the latter likely far predated the former.

The California Department of Motor Vehicles told AsAm News that the plate was approved all the way back in 2006.

“The DMV currently does not have the authority to cancel this type of plate due to the court ruling in the Ogilvie case,” a spokesperson said, referencing a U.S. District Court decision last fall that prohibits the DMV from banning certain “offensive” plates — though it does allow for the ban of hate speech. “The DMV is currently evaluating its options as they relate to the ruling.”

It’s unclear why this plate was ever granted in the first place — over a decade before the aforementioned court ruling — and the CA DMV says they no longer have access to that information or the original application.