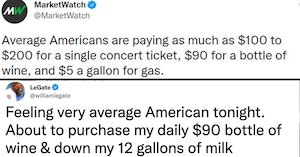 A tweet about inflation that many interpreted to mean “average Americans” are routinely paying $90 for a bottle of wine sent the internet into a frenzy on Saturday.

MarketWatch recently reported that inflation is the highest it’s been in the United States in almost 31 years, citing “elevated price tags on everything from concert tickets to wine to gasoline.”

Their tweet sharing the article, however, somehow got more specific, claiming that “average Americans are paying as much as $100 to $200 for a single concert ticket, $90 for a bottle of wine, and $5 a gallon for gas.”

Gas prices aren’t great, but they aren’t that different from pre-COVID, and it’s been more and more difficult to find reasonably priced concert tickets, but that isn’t new, and has more to do with the exorbitant fees tacked on by places like Ticketmaster and how quickly scalpers snatch everything up. However, the idea that there’s anything “average” about spending $90 on a bottle of wine was so out of left field that people struck back at it immediately.

And, particularly after MarketWatch deleted the original tweet amid backlash, many accused them of “inflation fear-mongering,” a fairly well-documented Republican tactic generally used to freak their base out about anything Democrats in power want to do that involves spending money, even if it ultimately benefits lower-income folks.

But collectively dunking on awful takes is one of social media’s favorite past times, and this $90 wine nonsense definitely provided that opportunity.