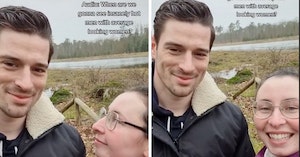 An author on TikTok has been trolled in the past for having a husband the internet deems is “hotter” than her, and she decided to troll the internet right back in a video she posted.

The overlay Hazel McBride, aka @hazelmcbrideauthor, wrote on the video reads, “Audio: When are we gonna see insanely hot men with average-looking women?”

This video struck a chord with many commenters who said that she wasn’t unattractive and that she was putting herself down.

McBride, 29, records videos with her husband Paul, though she has said he tends to be very shy. The two met at a nightclub in Tenerife, where the author worked as a killer whale trainer, and they now live in Amsterdam with their dog Whiskey.

McBride often posts about being both a novelist and fanfiction writer, meaning stories written about pre-existing popular culture like TV shows and movies, and posted for free online.

She also habitually posts videos about how attractive Paul is. When she shared some of their engagement photos on TikTok, she added the note, “When you get engaged to an extremely handsome man who makes you look like a 4/10 on a good day.”

While she often jokes about feeling less attractive around her husband, McBride has said she feels perfectly “secure” in her looks around him.

The video, from February last year, is still making the rounds and has a whopping 11.4 million views.

Another stated, “I am confused sis. Don’t put yourself down like that.”

There are others who pointed out that McBride was “dressed down on purpose” and that it was a joke, which the author and podcast host pointed to as being 100% accurate in a follow-up video just the other day. She said in that TikTok that she found the comments section of the original video “hilarious.”

When someone asked her if the comparisons between them made her feel insecure, she replied simply, “Nope! I am so secure in our relationship and in myself.”

McBride stated in her follow-up that the viral video was an off-the-cuff, thoughtless post on a trend that had been going on at the time where supposedly “un-glamorous” women share the pride they have in their more conventionally-attractive partners.