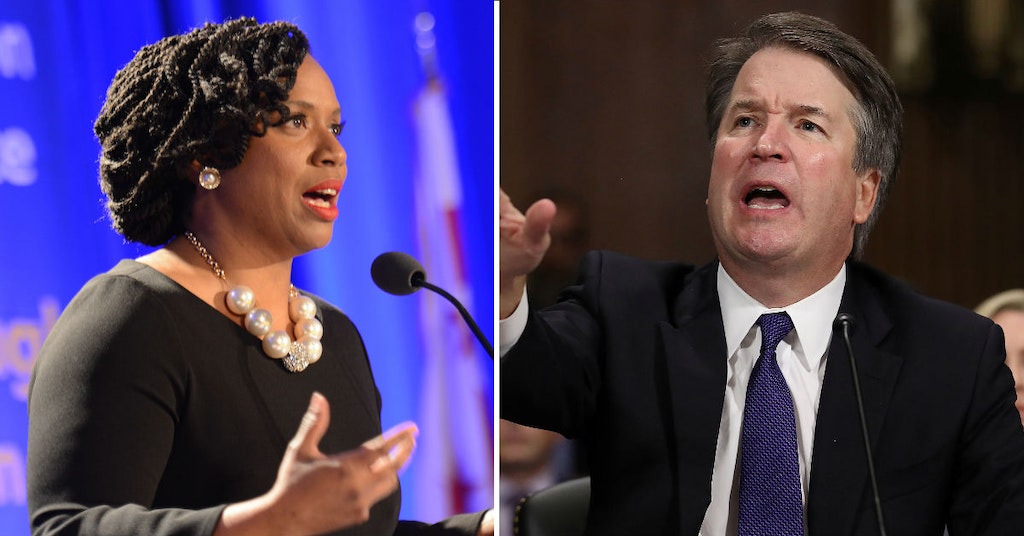 Representative Ayanna Pressley, one of the four young congresswomen who makes up the group known as “The Squad,” has become the first to file an impeachment resolution against Brett Kavanaugh following the latest sexual assault allegations against the Supreme Court justice.

A year ago, we stood in community to oppose Brett Kavanaugh’s nomination to the Supreme Court. Today, I introduced a resolution calling for his impeachment. I still believe Christine Blasey Ford. I still believe Deborah Ramirez. #ImpeachKavanaugh pic.twitter.com/GoAEo0GO6L

The resolution is an attempt to pressure the House Judiciary Committee to launch an investigation into the charges and is the first step toward removing Kavanaugh from the bench.

Filing the resolution also grants the committee the power to subpoena individuals related to the case and gives it or a task force appointed by said committee funding and resources for the investigation.

“Sexual predators do not deserve a seat on the nation’s highest court and Brett Kavanaugh’s confirmation process set a dangerous precedent,” Pressley said in a statement on the resolution. “We must demand justice for survivors and hold Kavanaugh accountable for his actions.”

The new allegations against Kavanaugh come from a New York Times report by Robin Pogrebin and Kate Kelly, who are writing the book on the rushed investigation and confirmation of the justice, in which they talk about his past (hopefully) habit of shoving his genitals into the hands and faces of non-consenting women and girls.

The story has revived unresolved anger against Kavanaugh and the politicians who forced his confirmation through in spite of multiple credible sexual assault allegations that were not allowed to be fully investigated.

Although experts largely agree that actually removing him from the bench would be difficult to impossible, many feel that impeachment should be attempted regardless in order to facilitate a better investigation into the charges and send an important message along the lines of “sexual predators should not sit on the highest court in the nation.”

Thx to @KamalaHarris and @ewarren for calling for Kavanaugh impeachment. An honorable person would step down because his presence threatens the legitimacy of an institution critical to our democracy. But like the man who nominated him, he cares more for himself than our country.

The impeachment of Brett Kavanaugh is the ultimate lost cause that's worth fighting for. The radical restoration of America's broken justice can and should start with getting a man who lied about abusing women off the nation's highest court. My new column: https://t.co/OfQIplEUvG

A handful of House Democrats have voiced their support for kicking off an impeachment inquiry of Kavanaugh:

Mitch McConnell rushed the confirmation process to protect Kavanaugh, robbing the American people of a thorough investigation into the allegations. It’s never been clearer that he never should have been confirmed. #BelieveSurvivors https://t.co/28CrE64nsH

Someone facing credible sexual assault allegations does not belong on our highest seat of justice. That’s a lesson this country should not have had to learn twice. We need an impeachment inquiry on Kavanaugh. We need court reform. And we need justice for survivors we have failed.

Nothing terrifies this corrupt president more than the idea of Congress upholding the rule of law.

We must open impeachment inquiries against Trump *and* Kavanaugh immediately. It’s our constitutional duty. https://t.co/OVjBDWSqZT

Rep. Clark on impeaching Supreme Court Justice Kavanaugh: "If we're going to change the culture of sexual harassment in this country we need to take these investigations seriously and if the facts lead us there, I think impeachment is on the table."https://t.co/xeWW6R1ZlE

And several 2020 Democratic hopefuls are calling for Kavanaugh’s impeachment as well:

It’s more clear than ever that Brett Kavanaugh lied under oath. He should be impeached.

And Congress should review the failure of the Department of Justice to properly investigate the matter. https://t.co/Yg1eh0CkNl

Last year the Kavanaugh nomination was rammed through the Senate without a thorough examination of the allegations against him. Confirmation is not exoneration, and these newest revelations are disturbing. Like the man who appointed him, Kavanaugh should be impeached.

I sat through those hearings. Brett Kavanaugh lied to the U.S. Senate and most importantly to the American people. He was put on the Court through a sham process and his place on the Court is an insult to the pursuit of truth and justice.

He must be impeached.

Yesterday, we learned of another accusation against Brett Kavanaugh—one we didn't find out about before he was confirmed because the Senate forced the F.B.I. to rush its investigation to save his nomination. We know he lied under oath. He should be impeached.

The revelations today confirm what we already knew: During his hearing, Kavanaugh faced credible accusations and likely lied to Congress. I support any appropriate constitutional mechanism to hold him accountable.

This new allegation and additional corroborating evidence adds to a long list of reasons why Brett Kavanaugh should not be a Supreme Court justice. I stand with survivors and countless other Americans in calling for impeachment proceedings to begin. (2/2)

Sometimes you have to do the right thing even if it’s hard. Did certain senior Democrats not watch those after-school specials?