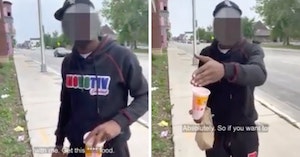 Mom Puts Father Of Her Kid On Blast For Only Feeding Child He Fathered, Sparking A Debate

A woman recently put her “baby daddy” on blast for only feeding the child he had with her and not her other three children as well.

The woman, Lisa, can be heard cursing the man out after he rolls up to her house with McDonald’s for his kid. She seems to be under the impression that he should be feeding the other children as well, even though he isn’t their father.

“How come you can’t feed my other kids f–king McDonald’s, though?” she says in the video before he arrives. “You’re not finna sit here and make my other kids feel left out, and you’re only bringing one child something to f–king eat.”

When he drives up to the building, she says, “Look there he go, and I bet you he only got one thing. I’m finna expose the s–t out of him so people can see how he really is.”

The pair have a heated exchange after Lisa says she’s going to “expose” her baby daddy for refusing to feed her other kids.

She is under the impression that the father of one of her kids should be buying food for all of them, not just one burger and one order of fries for his own kid.

She then says, “Okay, but them your kid’s siblings.”

The man questions why she’s recording and why she thinks she’s entitled to be given food for her other children as well. He asks her if she hasn’t fed the others, and she shouts at him, “You know I don’t get my food stamps till the seventh!”

He quite rightly asks her, “Lisa, how the f-ck is that my problem?”

Her baby daddy explains that she’s the one who decided to have so many kids, and the only one he’s responsible for his is own child.

Lisa isn’t happy about this and says that he makes the other kids feel bad by not getting them McDonald’s as well, to which he gives reasonable options of putting his kid in her room to eat or letting them eat in his car with him.

He asks in the video where the other kids’ fathers are, and she skirts around the question by saying he knew what he was getting into when they had a child together.

He tries to hand her the food, but she throws the drink into the street and tosses the bag of food on the ground, shouting that his kid won’t eat McDonald’s either if he doesn’t bring food for all of them.

Throughout the exchange, the man remains calm, likely used to the woman’s attitude and strange opinions.

Commenters on the video were largely on Baby Daddy’s side.