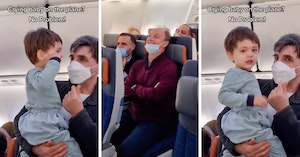 Taking a baby or young child on an airplane can be a difficult situation for everyone. Some passengers don’t understand the concept of public transportation and get annoyed if the kid makes any sound, while parents often fret about a crying baby potentially disturbing those around them. But passengers on a recent flight served up a reminder that there are ways to make things better for everyone on board — including the kid.

Video posted to TikTok by @parikshitbalochi showed a partially full plane of passengers all banding together to sing “Baby Shark” to help calm a child who had been crying.

The camera pans across the interior of the plane, showing that most of the people on board were singing or at least clapping along, while a man stood in the aisle holding a young boy with red-rimmed eyes who seemed to be calming down thanks to the help of all these strangers.

“Crying baby on the plane?” reads the text overlay. “No problem!”

The incident is said to have taken place during a six-hour flight between Dubai and Albania earlier this month, and the person who recorded the video and had been sitting next to the family described a situation where the boy had been “crying nonstop.”

“First individually people sitting around him tried distracting him, but when nothing worked out a group of guys, including me, started singing Baby Shark and more people joined in,” he said.

It’s definitely not a normal sight when it comes to dealing with upset children on airplanes, certainly not in the U.S. anyway. But it shows how quickly problems can be solved if people come together rather than judging or getting upset.

And viewers were eager to cheer it on.

“Hyping up and supporting parents who are doing their best,” @crashberry78 pointed out.

And @missylight205 nailed it, adding, “It literally costs nothing to be a decent person. We need more of this.”

The only downside, really, is how long every single one of those people likely had “Baby Shark” stuck in their head after this. And now, so do the rest of us.