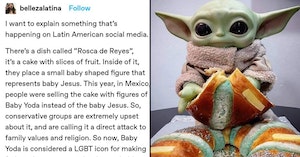 Baby Yoda Becomes An LGBT Icon, Much To Conservatives’ Dismay

Thanks to Baby Yoda replacing Baby Jesus in a Christmas season tradition, it appears that the iconic Mandalorian character has inadvertently become an LGBTQ+ symbol in the process.

It started with, as Remezcla reported, a Mexico City restaurant creating a Rosca de Reyes—a Mexican version of the King Cake tradition that was popularized in New Orleans.

The article notes that the dessert, “traditionally eaten during Día de Los Reyes Magos,” was created by Kraneo Foods “with a twist. Instead of a small figurine of Baby Jesus baked inside the ring-shaped sweet bread, Kraneo Foods has replaced him with Baby Yoda.”

As Viane Londoño shared on her Twitter account, a post she shared—tied to a Jan. 4 article in Milenio—notes that a Mexican coalition of organizations, Frente Nacional por la Familia (National Front for the Family), labeled the use of the Baby Yoda in the cake “an attack on religion.”

That has somehow since extended to Baby Yoda being considered “an LBGT icon” for triggering religious conservatives.

She also shared art she made of Baby Yoda to celebrate the new icon status.

Another Twitter user, asserting that “Old Yoda could never,” shared an article going into the controversy.

Someone else explained that the baby in the Rosca de Reyes isn’t quite supposed to be the Baby Jesus, but concurred that Baby Yoda does have legitimate LGBT icon status.

And at least one New Orleans-based T-shirt shop is looking to cash in on the convergence, making “King Cake Baby” shirts with Baby Yoda’s head atop a traditional King Cake baby, with disturbing results.