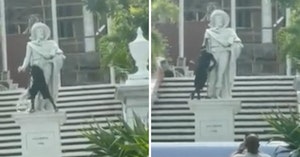 A video of a man in the Bahamas taking a sledgehammer to a statue of Christopher Columbus, shared by popular Twitter accounts on Indigenous Peoples’ Day, has upset a number of Columbus fans who think they know history but clearly not that of the Bahamas.

According to local news, the video originates from Saturday, just before the man smashing the statue’s leg was arrested on charges of vandalism and unlawful possession of a bulletproof vest.

Columbus has become an increasingly unpopular figure around the world as people begin to focus more on the many, many terrible things he did to the indigenous peoples he met while he was running around “discovering” land people were already living on. This is particularly true in Caribbean nations where Columbus and other colonizers enslaved, tortured, murdered, and in some cases, entirely wiped out the native populations.

In the Bahamas, the indigenous population of around 40,000 Lucayan people was wiped out from slavery, disease, and general mass murder within 25 years of Columbus landing on their shores. The islands are now largely populated by the descendants of African slaves brought over by the Atlantic slave trade, beginning perhaps as a direct result of Columbus’ initial efforts to enslave large portions of natives to do the work of exploiting the natural resources of the places he stumbled upon.

Unfortunately, the realities of Columbus’ legacy have become the very essence of historical whitewashing, with U.S. school children across the nation learning about him as an intrepid explorer and hero without mentioning any of the bad things he did. Only through the efforts of indigenous peoples, with a bit of help from the internet, did many come to understand just how much genocide this one single man was responsible for and how maybe that’s not a person to be celebrated with statues and holidays in his name.

Of course, this only made white supremacists love him more.

Every year for the past several years now, Columbus and the U.S. holiday named after him becomes a talking point for conservatives screaming about cancel culture while native folks ask us to instead take a day to remember all that their ancestors went through so that many of the rest of us could live here. Right-wingers continue to argue that the man deserves statues for having any kind of impact even if they manage to admit that slavery and genocide are bad, and in spite of the fact that by the very definition of the word, Columbus discovered nothing, because everywhere he landed, people were there already.

After so many years of this, sometimes all you can do is continue to rehash jokes knowing that a good number of people are dedicated to refusing to get the point. The bright side is that thanks to one man and his sledgehammer, October 11 is a little bit brighter this year.