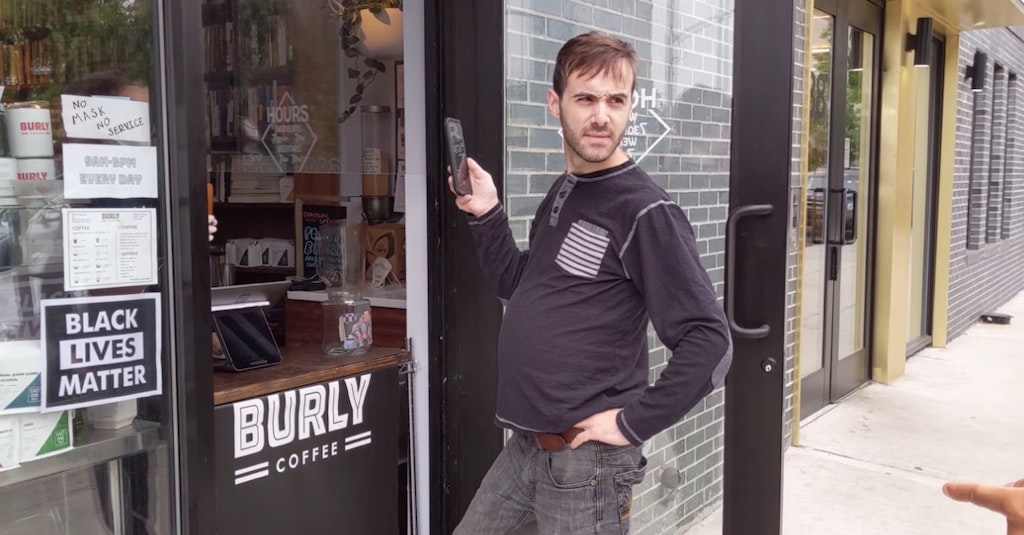 Video showing a man harassing a barista over a Black Lives Matter sign at a coffee shop in New York City is the latest absurd empowered display of racism making the rounds on the internet.

In the footage, an irritating man identified by Gothamist as Abraham Knofler stands at the service window at Burly Coffee in Bed-Stuy, demanding that the barista remove a small sign in the window that says “Black Lives Matter.

She refuses, over and over again, and even attempts to explain to Knofler why saying “Black Lives Matter” isn’t saying that “All Lives Matter,” but he has no interest in listening to anything but his own voice.

The barista and other customers and passersby make repeated attempts to get Knofler to leave, even pointing out that a sign above the “Black Lives Matter” sign says that people who aren’t wearing a mask — which Knofler wasn’t — will not be served.

“It’s a protest,” he insists, and begins to chant “All Lives Matter” over and over.

The coffee shop says this isn’t the first time Knofler has caused problems.

A statement posted to their Instagram reaffirming their support for Black Lives Matter says “this was not an isolated incident with this person and our priority continues to be the safety and well-being of our staff.”

According to Gothamist, posts on Knofler’s since-deleted Twitter page are “decidedly pro-Trump, with lots of RTs of conservative figures; he also refers to coronavirus as a hoax (#covidBS).

When they reached out to him, he reiterated that he “wanted to defend all lives matter.”

The coffee shop ultimately had to literally close to get Knofler to go away.

But even that took some coordinated effort.

As if being roasted by New Yorkers in person wasn’t enough, the internet took plenty of swings at Knofler’s belligerence and racism after the video came out.

And people are coming out to show their support for the coffee shop after the absolute refusal to give in to this nonsense.

Burly Coffee has confirmed that any tips received via Venmo yesterday were going straight to the baristas that had to deal with this loser, and added that they “will be making a contribution in support of the community we love and are thankful to be a part of.”