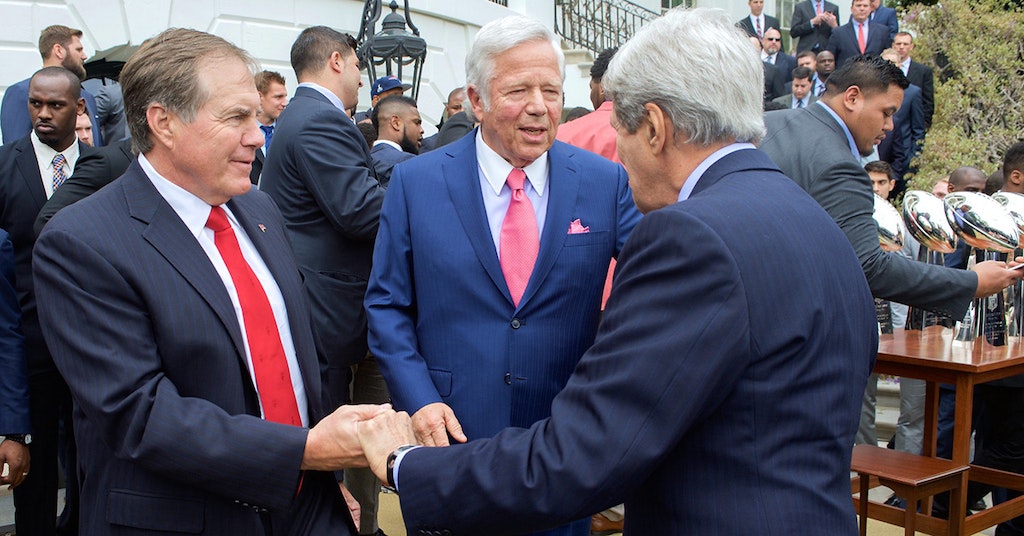 
New England Patriots head coach Bill Belichick, who endorsed President Trump in 2016, announced on Monday that he would not be accepting the Presidential Medal of Freedom reportedly offered to him.

The statement was shared in full by ESPN's veteran NFL reporter Adam Schefter on Twitter on Monday evening. While Belicheck noted in his statement that he was "flattered by" the offering of the award, "out of respect for what the honor represents and admiration for prior recipients."

But he also noted, "The tragic events of last week occurred and the decision has been made not to move forward with the award."

NBC Sports commentator Mike Florio commented, observed that Belichick was trying to thread a needle in the prepared statement.

"The carefully crafted statement, including among other things deft use of the passive voice regarding Belichick’s decision to punt on the award, makes a very important point without directly saying it," Florio said. "Belichick now believes that the man he openly supported for the office of the presidency in 2016 has behaved in a way that cannot be reconciled with notions of social justice, equality, and human rights. Thus, Belichick cannot reconcile accepting a significant individual honor with his obligations to his family and his football team."

The announcement was already sparking controversy among some seasoned sportswriters. The Boston Globe's Bob Ryan, a longtime voice on all things Boston sports, said, "If this story about Bill Belichick accepting a Medal of Freedom from the disgraced occupant of the White House is true, he’s dead to me. Say it ain’t so, Bill. I sincerely hope this is Fake News."

By contrast, Gerry Callahan, former Boston sports talk radio personality and current podcaster, noted, "If Belichick goes to the White House and actually allows @POTUS to drape that thing around his neck, my respect for him will soar to another level. That will take real courage."

He then added a dig at Ryan's employer, saying, "The Globe is probably already digging thru his high school yearbook looking for dirt. Gonna get ugly."

One user disagreed with the move, saying, "Y’all really guilt-tripped him out of literally the highest possible honor awarded to a civilian in this country lol."

Others, if not exactly applauding the move, registered their approval, including actor and outspoken Trump opponent Michael Rapaport, who said, "Hahqhqhqhqhqhqhqhqhq."

Belichick wrote Trump a personal letter of support in the days leading up to the 2016 election, and the night before Election Day 2016, Trump read from the letter on the campaign trail. The tacit endorsement has been part of Belichick's legacy ever since.