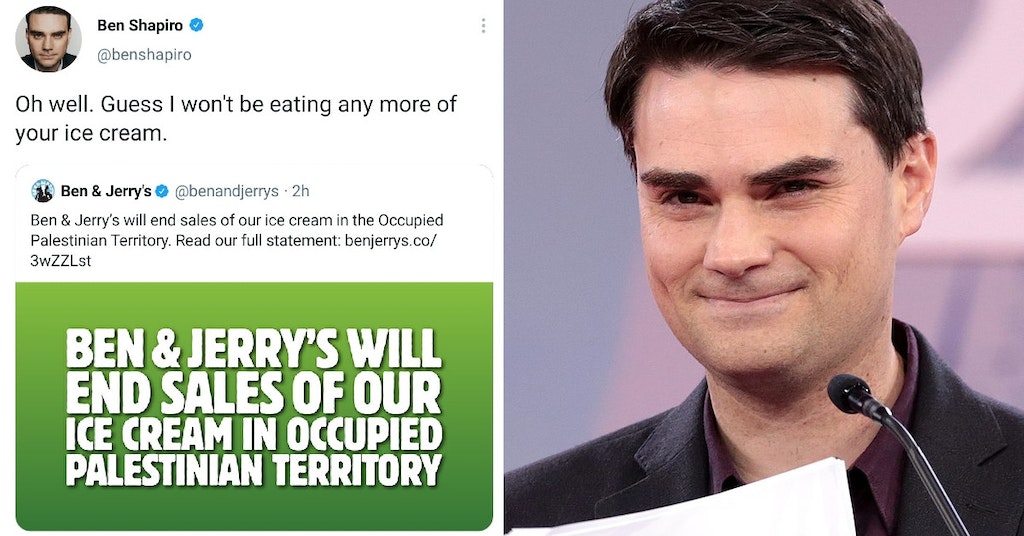 Following the announcement by ice cream company Ben & Jerry’s that they will no longer be selling their ice cream in Palestinian territories occupied by Israeli forces, right-wing pundits were quick to once again show themselves to be utter hypocrites on the topic of what they like to call “cancel culture.” Far-right mouthpiece Ben Shapiro was one of the first to announce that he will no longer support the ice cream brand, and in doing so, accidentally made himself into a “vindictive a-hole” according to 2012 Ben Shapiro.

“Oh well,” Shapiro wrote on Monday following the creamy announcement. “Guess I won’t be eating any more of your ice cream.”

It didn’t take long for people to uncover another tweet by the pundit on the topic of Ben & Jerry’s ice cream that was more in line with his opinions on “cancel culture” any time something is boycotted for a reason he happens to not agree with.

“I think the owners of Ben & Jerry’s are awful politically,” he tweeted in 2012. “But they make great ice cream, so I eat there. B/c I’m not a vindictive a-hole.”

Shapiro soon noticed that people everywhere were dragging him for calling himself an a-hole, and the excuse that he came up with is that he changed his mind about boycotts (also known as canceling brands, according to Republicans like Shapiro) because some clap-trap about “mutually assured destruction.”

It seems like if we’re all going to kill each other with some kind of rhetorical nukes, then we might as well all just enjoy some ice cream before our faces melt off. But it also seems like if Ben Shapiro has decided that canceling companies is a necessary evil, he should probably stop screaming into the wind about “cancel culture” every time people criticize any business or institution for things like being openly bigoted or allowing their product to be used for vicious harassment campaigns.

Ben & Jerry’s was silent on social media for about two months after they received sharp criticism for operating their ice cream shops on occupied Palestinian lands stolen during Israel’s ongoing apartheid campaign against the local population. The declaration that they will cease these operations have come as good news to supporters of Palestine, though they are still wary of the note in the press release which states that the company “will stay in Israel through a different arrangement.”

In the meantime, any revenue loss from Ben Shapiro switching to the objectively inferior Häagen-Dazs brand will likely be offset by an increase from proponents of Palestinian liberation. Either way, this is being generally treated as a general shift among U.S. liberals when it comes to the topic of Palestine and Israel, with criticism against the continuing theft of Palestinian lands and increasingly deplorable conditions suffered by those trapped in the Gaza Strip ramping up over the past several months.

Even among those who still support Israel, everyone on the left can agree that Ben Shapiro is an absurd little man.