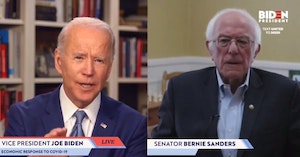 After suspending his campaign last week, Senator Bernie Sanders has today formally endorsed former Vice President Joe Biden for president against incumbent Donald Trump. The two Democratic candidates have joined forces and are currently working on joint policy proposals in order to unify the party ahead of the election in November.

We must come together to defeat the most dangerous president in modern history. I'm joining @JoeBiden's livestream with a special announcement. https://t.co/AC3zh3ChX3

“We need you in the White House. I will do all that I can to see that that happens, Joe,” Sanders said to Biden during a live-streamed broadcast to supporters.

Sanders’ endorsement after suspending his campaign comes as no surprise to many considering the fact that he endorsed Hillary Clinton after ending his 2016 presidential attempt. This time around, he ended his campaign sooner rather than later after it seemed to be going down the same path as it did against Clinton. He had already essentially stopped campaigning weeks before making it official in order to focus all of his energy on fighting the coronavirus pandemic.

Sanders and Biden, and their respective supporters, have a lot of differences in opinion. However, they are united in one key goal: Getting Trump out of office.

“It’s no great secret out there, Joe, that you and I have our differences, and we’re not going to paper them over. That’s real,” Sanders said. “But I hope that these task forces will come together utilizing the best minds and people in your campaign and in my campaign to work out real solutions to these very, very important problems.”

Biden, in return, thanked Sanders for his support and signaled that they would continue working together beyond the November election.

“I think that your endorsement means a great deal,” Biden said. “It means a great deal to me. I think people are going to be surprised that we are apart on some issues but we’re awfully close on a whole bunch of others. I’m going to need you — not just to win the campaign, but to govern.”

The pair have so far announced six task forces they will be working on together, which will be on the subjects of economy, education, criminal justice, immigration, climate change, and healthcare.

Not everyone agreed with Sanders’ decision to endorse Biden, particularly considering the accusations of sexual assault from Tara Reade that re-emerged in recent weeks.

Love you Bernie but pic.twitter.com/QlctxO9BuX

Gotta part with Bernie as of today. Saw this coming and I love the man, but that’s a wrap.

The revolution does not endorse that cognitively impaired rapist, corporatist, and #MedicareForAll denier. pic.twitter.com/mDINZoCZNG

Others, however, were grateful for the endorsement.

Thank you, Sen. Sanders. I believed in you, and your decision today reinforces why I still do. Thank you.

At the end of the day, we need to take back the White House, flip the Senate blue, and keep the House blue ????????

Bernie needs to play it cool and keep/gain more of a voice in the senate. He knows now is the time and the movement and overhauling the system has always been more important to him than winning.

He knows how to play the game.

Either way, at least it’s one less thing to worry about.