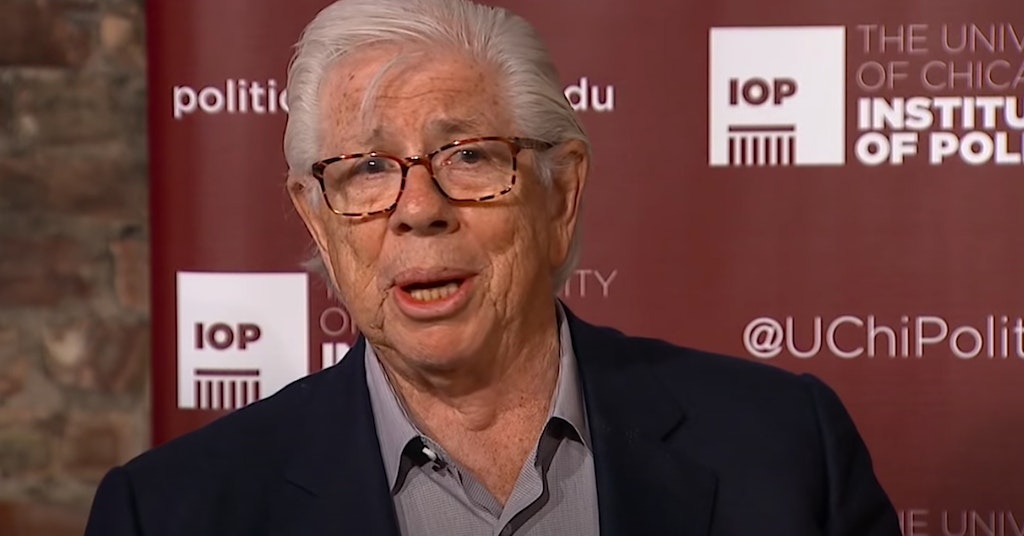 via YouTube/UChicago Institute of Politics

Carl Bernstein, most well-known for being one of the two reporters who broke most of the infamous Watergate scandal back in the 1970s, tweeted out the names of 21 Republican Senators who he says “repeatedly expressed extreme contempt for Trump” on Sunday night.

Most Republican politicians have been disturbingly silent as President Trump repeatedly does everything he can to undermine faith in our democracy, insisting that the election is being “stolen” from him, despite being able to provide no credible evidence to back up his claims.

Some members of the GOP have even gone so far as to express support for his attempt at overturning Joe Biden’s landslide win, while others, we have often been told, are quietly passing along their congratulations to the new President-elect because they are afraid to do so publicly.

If true, it’s the kind of behavior that has summed up GOP reactions to the past four years of Trump breaking laws, breaking norms, and creating issues in the United States that could take generations to repair. Republicans have, largely, looked the other way or quietly expressed disagreement or uncertainty while ultimately going along with whatever Trump wants.

Bernstein had nothing but criticism for these actions — or inactions — when he listed off names on Twitter.

“With few exceptions, their craven public silence has helped enable Trump’s most grievous conduct—including undermining and discrediting the US electoral system,” he wrote.

According to The Independent, Romney, Toomey, Murkowski, Sasse, and Cornyn have, at least, criticized Trump either for not conceding after his loss or for not giving Biden’s transition team access to intelligence briefings, while the other senators have mostly failed to prioritize country over party and have stayed silent regarding the election results.

Bernstein’s decision to name names comes on the heels of an appearance he made on CNN, discussing Georgia Secretary of State Brad Raffensperger’s refusal to pretend that Georgia’s election was compromised in order to benefit Trump.

“He just said what every Republican member of the Senate of the United States should have been saying weeks ago,” Bernstein said. “He did and said what a patriot would do, and what our Senators, the Republicans in the U.S. Senate, by and large, almost all of them, have failed to do.”

Bernstein spared no kind words for Trump in the segment, likening him to a “mad king in the final days of his reign,” attempting to undermine the whole of American democracy for his “own petulant, selfish, rabid ends.”

He went on to list a number of senators who he said despise Trump and have said so in private for the last several years — some of the names that later appeared on his Twitter list.

Bernstein also said he had heard rumblings that some Republicans, including Mitch McConnell, have finally realized the U.S. is in a bad situation with Trump convincing his base that the election was rigged when there is no evidence suggesting that’s true, and have privately been discussing ways to “bring the country off the ledge we are on because of the mad king.”

But, he added, “it may be too little, too late,” thanks to Trump’s years of divisiveness, flailing attempt at a coup, and the silence of the Republicans who enabled him every step of the way.