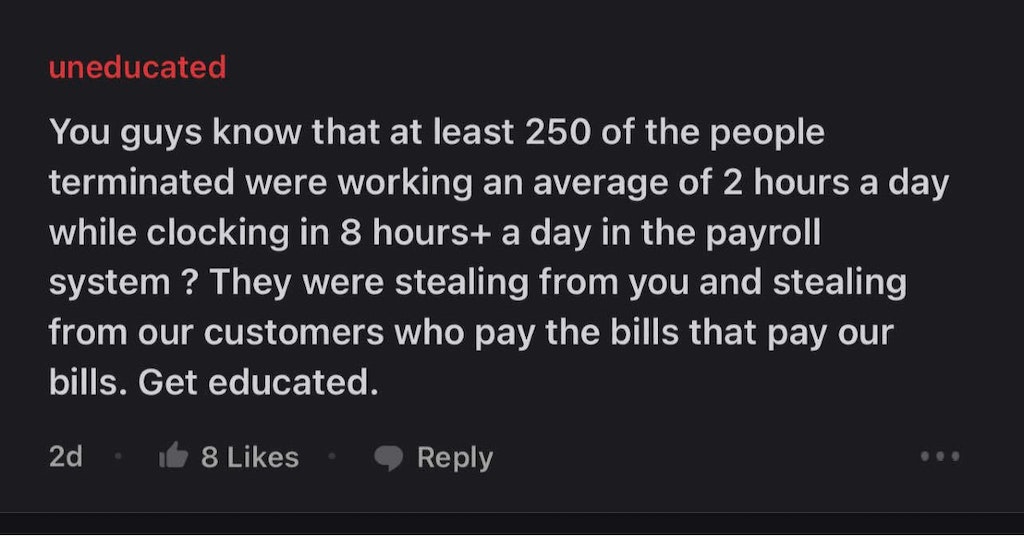 ‘F—k You, Dude’—CEO Fires 900 Workers On Zoom Call, Then ‘Anonymously’ Trashes Them On A Review Site

Vishal Garg, CEO of mortgage loan company Better.com who famously laid off 900 employees in one Zoom call during the holiday season, has responded to criticism by going on an anonymous review platform to accuse hundreds of those people of being slackers who deserved it. Garg became one of the internet’s fabled main characters over the weekend when a former Better.com employee posted a video of the Zoom call on TikTok in which he told around 10 percent of his workforce that in spite of a huge cash infusion from going public, he couldn’t afford to keep them.

After people widely expressed skepticism over the idea that a corporation worth $7.7 billion after it got $750 million for its public offering needed to do this, Garg seemed to change his tune in comments that he confessed were his on Blind, an app in which “verified professionals communicate anonymously.”

In an interview with Fortune, Garg confirmed himself to be the man behind Blind comments that accused at least 250 former employees of “stealing” from him and customers, claiming that they were only working two hours per day, missing calls, showing up late, and various other alleged offenses.

“You guys know that at least 250 of the people terminated were working an average of 2 hours a day while clocking in 8 hours+ a day in the payroll system?” he wrote. “They were stealing from you and stealing from our customers who pay the bills that pay our bills. Get educated.”

Ironically, Garg’s username, randomly generated by Blind as it does for all its users, is “uneducated.” He might also be interested to know, being so interested in education, that studies on workplace productivity have found that workers in office environments do an average of three hours of work in an eight-hour workday. The human capacity for work, the studies argue, is simply limited, and trying to force people to work more than a couple of hours straight sends productivity into the toilet.

Other companies and entire nations have addressed this by increasing and mandating break times and reducing daily and weekly work hours, finding that doing so increases productivity dramatically. Other companies, led by CEOs like Garg, place the blame on their non-robot workers for their failure to create a productive work environment and use it to justify mass layoffs.

Garg had no word as to why the other 650 workers needed to be laid off and were unapologetic for his trashing of hundreds of his former employees.

“I think they could have been phrased differently, but honestly the sentiment is there,” he told Fortune.

He may also have to answer for previous Blind comments after people began digging up more under the “uneducated” username in which he told people complaining about poor workplace conditions and culture they should just quit, sometimes insulting them in the process.

“You should quit and go work elsewhere if you are this unhappy with senior management,” he wrote in one comment. “If you’ve been here since 2019 you probably have more stock vested in value than the savings of most Americans. That in all likelihood makes you an ingrate galore. Just quit pls, move on and let the rest of your equity expire for others who want to work harder to earn.”

In a thread specifically complaining about the work culture at Better.com, “uneducated” defended the company and implied those who were critical were all people who were born rich and never had to face any real problems.

“The Fancy people with the snow plowed parents and the fancy degrees don’t usually do well in the jungle. Life isn’t an Instagram [sic] post or an Airbnb ad for 99% of us. No one gives a shit that you got into Harvard or Stanford and then got a job at name your Silicon Valley and then came here when we all know your parents spent $50k a year from pre-k to 12 helicoptering you over every pothole.”

Though Garg has not yet confirmed that these older comments belong to him, it’s been noted that the writing style and borderline abusiveness is rather similar to statements he’s sent to employees in official company emails, such as this gem that landed his name in Forbes in 2020: