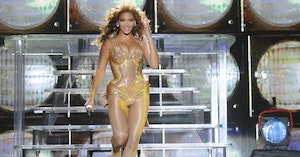 Beyoncé is under fire after performing her first headlining show in four years — in Dubai.

The singer was reportedly paid $24 million for a private concert celebrating the opening of Atlantis The Royal, a luxury hotel. While some fans were thrilled to discover she’s back on stage, others felt it was a betrayal of her large LGBTQ+ fanbase to perform somewhere with strict laws against being gay.

Some have defended Queen Bey, saying that fans in Dubai deserve to see her too, or that states in the U.S. have anti-LGBTQ+ laws so expecting her to perform there but not in Dubai would be hypocritical. They’ve also pointed out that other artists have performed in Dubai and claimed that there was no backlash in those instances.

However, the Dubai concert was a private event, and as horrifying as the current conservative push against LGBTQ+ rights in the U.S. is, Dubai’s laws actually support imprisoning openly queer people, and technically Sharia law allows homosexuality to be punishable by death.

Frustrated fans also noted that the set list included no songs from Beyoncé’s most recent album, Renaissance, which was inspired by and honors the intersection of queer and Black culture and how that has shaped music over the years.

Beyoncé herself hasn’t commented on the backlash — or fierce defense — but her father defended her decision to perform in Dubai, telling TMZ that she “united a really diverse crowd with her incredible performance.”

He also hinted that a proper tour is on the way — and there’s no doubt that as soon as those tickets go on sale, any controversy drummed up by Beyoncé’s performance in Dubai will soon be forgotten.