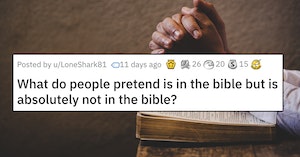 The Bible is often wielded as a defense by people who are acting really crappy, but who consider themselves to be good Christians. It seems like most of them have never actually cracked the book because there are a lot of mistaken ideas about what’s in there. And if they do know their scripture, they’re often misinterpreting it.

A thread started by u/LoneShark81 on the subject of misquoting the Bible is very illuminating, revealing how many things people think are from the Good Book that are actually from random other books—particularly Shakespeare plays.

The answers are almost as good as a year of Sunday school classes. Probably better, based on what a lot of people who went to Sunday school seem to think about Christ. Illuminate yourself below:

That Satan is in any way in charge of torture in hell. —derizen

My understanding is that hell is basically the furthest place from God you can be, and that in and of itself is the most pain an angel can experience. All the fire and brimstone shit is just stuff churches made up later. —kermi42

My brother has a friend that will argue with you that Jesus said in the Bible “Do as I say, not as I do”. —heyitsmeur_username

Half the shit Shakespeare said. —crazyisthenewnormal

That Mary Magdalene was a prostitue. A pope conflated her with Mary of Bethany and an unnamed “sinful woman,” because he didn’t like the fact that a woman was important to Jesus and wanted to discredit her. —israfilled

That Eve eats an “apple” —Kiwipecosa

“Neither a borrower nor a lender be”

I have had a minister ‘quote’ that to me as a Bible quote.

Edit: Lots of comments about the bible having stuff like this. Yes I know but a quote is a quote and from a christian professional you would at least expect an accurate quote from the bible but this is as wrong as quoting Hamlet and saying “Alas Poor Yorik, I knew him well” —Magnus_40

That money is the root of all evil. The correct quote is actually the *love* of money. —Pixxel_Wizzard

Since it’s close to Christmas time: There weren’t three wise men, just three gifts. No one knows how many wise men went. —Weirdguy149

The levels of hell. Dante wrote about his journey through hell. The levels are not biblical. —maruffin

The whole “Prosperity Theology” thing where wealth is encouraged, especially at the expense of tithing congregants. There’s very little in the way of biblical support for this idea, and in fact several places in the bible say quite the opposite.

It is easier for a camel to go through the eye of a needle than for a rich person to enter the kingdom of God.”

That quote is repeated a few times in the gospels, more or less, and similar sentiments are made elsewhere also. —wknight8111

That Jesus said anything about children suffering. “Suffer the children to come unto me” means to allow them. —Pythia007

That God wants your sports team to win. —CaesarWrap

That people become Angels when they die. Nope. —COAZRanger

People seem to think that angels are these beautiful dove winged creatures, but they’re described as being creatures so terrifying that they strike fear into literally everyone who encounters them. In reality, angels would probably be terrifying Lovecraftian creatures. —solojetpack

Most stuff about Satan and Hell. He doesn’t actually show up that much in the Bible and most stuff about him is taken from other previous cultures like Hades. Most of what people think of Hell is from Dante’s Inferno. —gentlybeepingheart

That Noah took two of each animal into the Ark.

He took 14: 7 male and 7 female of clean creatures and only a pair of unclean animals.

Give that he sacrificed one of each of the clean animals that would be quite a facepalm if he only had a pair.

Gen 8:20 And Noah builded an altar unto the Lord; and took of every clean beast, and of every clean fowl, and offered burnt offerings on the altar. —Magnus_40

All those people that think they’re better than the rest because they openly demonstrate they’re SO religious? The Bible literally says to pray and worship In secret. —The_Max_V