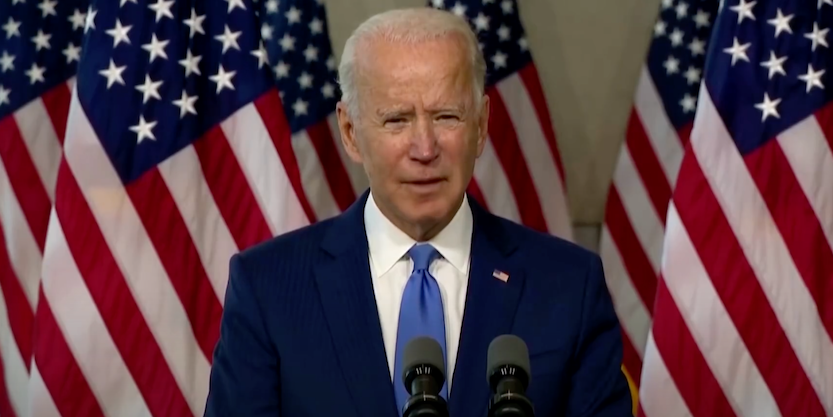 Sometimes the material writes itself. Democratic presidential candidate Joe Biden used a video of President Donald Trump, who said at a rally, “you’ll never see me again” if he lost to Biden during the 2020 election.

Trump himself said he would not know what to do, should he lose to the former vice president, as he addressed supporters in Fayetteville, North Carolina.

Biden’s team saw the clip as ready-made material that required nothing but captioning and a campaign-approved bookend: “I’m Joe Biden, and I approve this message.”

Many on Twitter loved Biden’s use of Trump’s quotes.

The flipping of Trump’s words come as the two candidates work the name-calling and one-upmanship of what will likely turn into a nasty and ruthless race toward the presidency.

As of September 21, FiveThirtyEight shows Biden with a 6.8% lead in its breakdown of polling. RealClearPolitics has 6.5% lead, with a 3.8% lead in battleground states.

This social media tug o’ war adds juice to the other major fight: the filling of Supreme Court associate justice Ruth Ginsburg‘s seat. Known as a champion for women’s rights, Ginsburg, 87, passed away on Friday. Trump has already said he would fill the seat “without delay” and that a woman would fill it.

On Sunday, Biden denounced Trump’s decision to advance with a nomination, appealing to moderate Senate Republicans to prevent the president from making a lifetime appointment that could significantly alter the political spectrum before the upcoming election results.

“To jam this nomination through the Senate is just an exercise in raw political power,” Mr. Biden said in a speech in Philadelphia, while also reminding the audience that Republicans refused to consider President Barack Obama’s nominee after Justice Antonin Scalia died in February 2016.

“I don’t believe the people of this nation will stand for it. President Trump has already made it clear this is about power, pure and simple.”