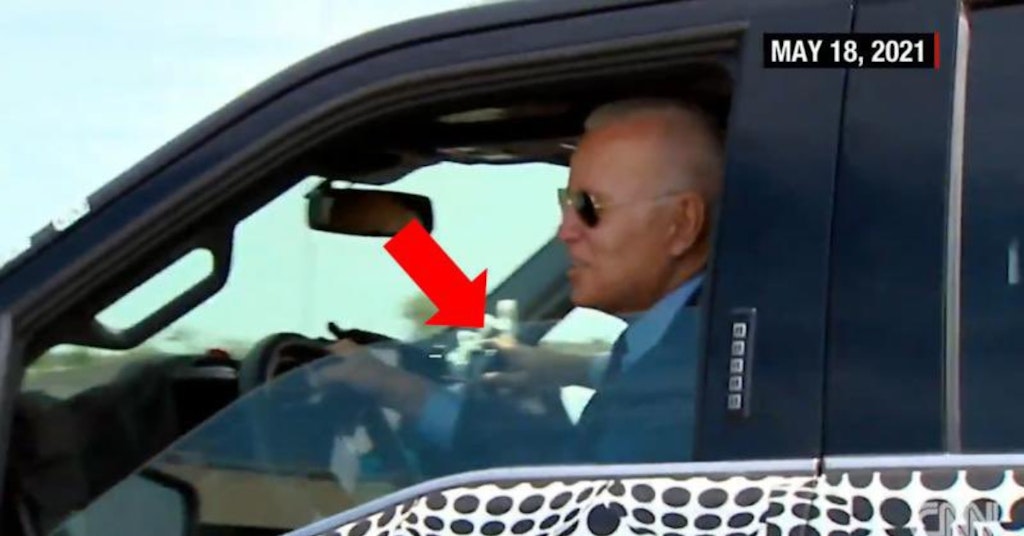 Critics of Joe Biden and right-wing conspiracy theorists really seem to be grasping at straws with this president, having to come up with scandals and theories around the current president that could put an insomniac to sleep. The most recent conspiracy they’re somehow buzzing about on Parler and Gab and what have you is that Biden wasn’t really driving that electric pickup truck he tried out in the video, claiming that there was a second steering wheel on the passenger side for his Secret Service agent.

Biden visited the Ford Rouge Electric Vehicle Center on Tuesday, where the company unveiled its new F-150 Lightning pickup (with a camouflage mesh to hide some of its exterior features for the official launch) and let the president do a test drive after he joked that he wanted to “lose the Secret Service and go out to the track.” Instead, a Secret Service agent went in the car with him, where a single photo kicked off the absurd yet dull conspiracy theory.

The screenshot provided by conspiracy theorists shows the passenger next to Biden reaching out to grab something that does look like it could be a steering wheel. However, photographs and other moments from the same video show that there was no passenger steering wheel, unless we’re supposed to believe that it was invisible the rest of the time.

As the conspiracy theory spread, we guess because these people think Biden is incapable of driving a pickup truck in a straight line or something, rational people were easily able to debunk it, using the footage to show that what was actually on the dashboard was a DSLR camera.

“Q types new theory de jour is that Biden wasn’t actually driving the electric F-150 and the Secret Service agent in the passenger seat was via hidden control,” wrote Twitter user zedster. “Except the agent was grabbing the DSLR camera on the dash to keep it from flying into his face when Biden floored.”

As always, the conspiracy theory continued to spread anyway, because it’s never about logic or reality. However, it’s hard to imagine this will do much damage to Biden’s reputation since even a fake test drive would be less embarrassing than the time Donald Trump sat in a semi and pretended to be a truck driver for a while.

Serious people, meanwhile, were more concerned about Biden’s joke about running over reporters who asked him about the situation in Gaza.

Biden praised the new truck as well as continuing efforts by Ford and the overall auto industry to refocus on electric vehicles as oil supplies dwindle and climate change continues to cause severe and deadly weather events each year, with worsening intensity.

“The future of the auto industry is electric,” said Biden in a speech. “There’s no turning back.”