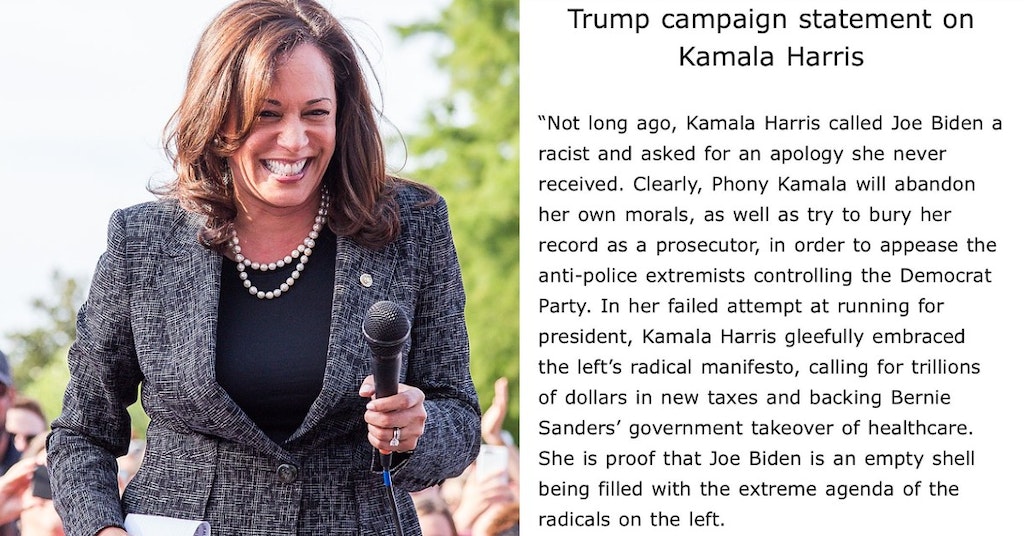 Former Vice President Joe Biden has officially tapped Senator Kamala Harris to be his running mate for the 2020 presidential election—a move that was expected by many, particularly after Biden pledged to choose a woman as people urged him to diversify the ticket. Kamala is also considered to be a fairly safe choice, with a record that complements Biden’s campaign promises while appealing somewhat to the progressive wing of the Democrats without scaring away moderates.

The Trump campaign, however, has some very different feelings about this news.

According to the Trump campaign, Harris, the former attorney general for the state of California, is a radical who will “appease the anti-police extremists controlling the Democrat party.”

“In her failed attempt at running for president, Kamala Harris gleefully embraced the left’s radical manifesto, calling for trillions of dollars in new taxes and backing Bernie Sanders’ government takeover of healthcare,” they wrote.

The statement is an extension of the Trump camp’s (possibly deliberate) confusing of Democrats with the growing number of people who consider themselves to the left of Democrats and liberals in general. Many of these individuals, whether they be actual anarchists, democratic socialists, or anything in between, have criticized Harris for her background as a prosecutor and attorney general, calling her a cop.

So while this pick may appease some Democrats, they will not appease anyone who is actually anti-police, and the ones controlling the “Democrat party” are definitely not the anti-police individuals. Biden himself has rejected the call to defund police and came out in favor of funding them more.

But if the Trump campaign was about accuracy, they probably wouldn’t have written that next paragraph.

“Joe Biden is no moderate, and with Harris as his ‘political living will,’ he is surrendering control of our nation to the radical mob with promised to raise taxes, cut police funding, kill energy jobs, open our borders, and appease socialist dictators,” they declared.

Wasting no time, they also put out a pre-made political ad attacking Harris, again bringing up that she called Biden’s crime bill racist and ignoring the fact that the vice president is supposed to be a balancing choice, not someone who agrees with everything the president has ever done. Trump himself promptly tweeted it.

The good news is that this aggressive response to the obvious pick and the contradictions within has provided ample ground for jokes among those who are, if not Harris fans, ready for anybody but Trump and Pence in the White House.