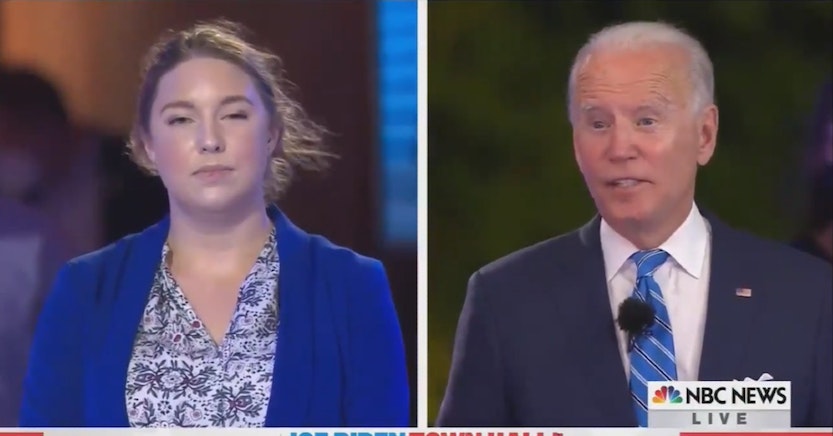 As Republicans move toward confirming Judge Amy Coney Barrett as a Supreme Court justice to replace the late Justice Ruth Bader Ginsberg, many people are concerned that the 6-3 conservative majority on the court will threaten the historic Roe v. Wade ruling that made abortion legal throughout the U.S. In response to a question about how Joe Biden would address the ruling being overturned, he promised to pass legislation to make abortion rights “the law of the land.”

During the recent NBC town hall with the former vice president, Cassidy Brown talked about her desire to launch a career before starting a family and how “having access to birth control and safe reproductive healthcare was imperative in making that true” for her. She asked Biden what his plans were to protect reproductive rights.

“The only responsible response to that would be to pass legislation making Roe the law of the land. That’s what I would do,” Biden answered.

Republicans, particularly those among the religious right, have long dreamed of overturning Roe v. Wade by taking over the Supreme Court, but doing so would only allow the party to pass laws making abortion illegal or inaccessible. However, the American public has long been in favor of abortion rights in most circumstances.

A 2019 Gallup poll found that 53 percent of those asked favor keeping abortion legal at least “under certain circumstances,” compared to just 21 percent who want it illegal in all cases and 25 percent who think it should be legal under any circumstances. Typically, people believe that late-term abortions should be restricted, which is already the case in all 50 states.

In response, Trump claimed that Biden “took a more Liberal position on Roe v. Wade than Elizabeth Warren at her highest” in one of his Tuesday tweets.

In reality, Senator Warren is fully in favor of the right to abortion under most circumstances and has never suggested that she would be against an attempt to pass legislation to protect that right if it became necessary. It just wasn’t necessary to address it until now.

A good number of people with the ability to become pregnant are happy about Biden’s promise to protect abortion rights.