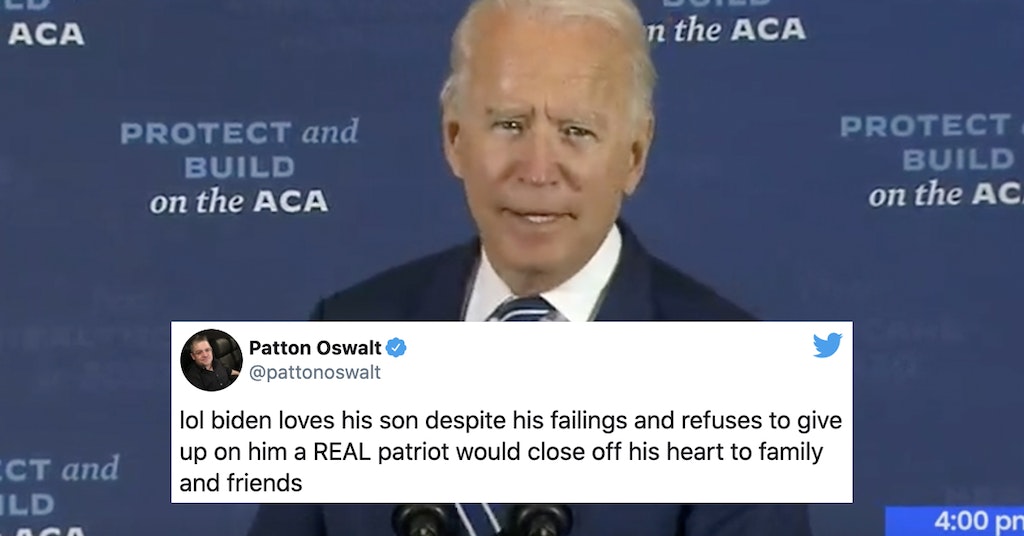 In an apparent attempt to replay the 2016 election’s stolen email scandal, Trump’s lawyer and fixer Rudy Giuliani has been leaking alleged private messages and emails from Joe Biden’s son Hunter Biden (the veracity of the messages hasn’t been established). Giuliani and the New York Post have been trickling out information—with the promise of more to come—that’s ostensibly damaging to Joe Biden and his presidential bid. Except it isn’t.

On Friday, the New York Post published another tranche of private messages purported to be from Joe Biden’s son Hunter Biden (which I will not link to).

The messages appear to be between Hunter and his father during a period when Hunter was in rehab dealing with substance abuse problems. In one text alleged to be from Joe Biden to his struggling son he writes, “Good morning my beautiful son. I miss you and love you. Dad.”

Unfortunately for Giuliani and his comrades in the Trump camp, as soon as this information hit Twitter it was met with a genuine outpouring of sympathy and respect for Biden—even from some of his critics.

It’s tough to imagine what Giuliani might have been thinking, but it seems like an attempt to either throw whatever they’ve got at Biden to see if something sticks or just kick up enough dust to make people think the democratic nominee is “scandal-plagued.”

Regardless, it seems focusing their attention on a non-political family member like Hunter was a strategic error. Biden—who has called the efforts to attack his son a “smear campaign”—memorably defended his son against Trump’s attacks during their debate and related his family’s struggles to other families dealing with addiction.