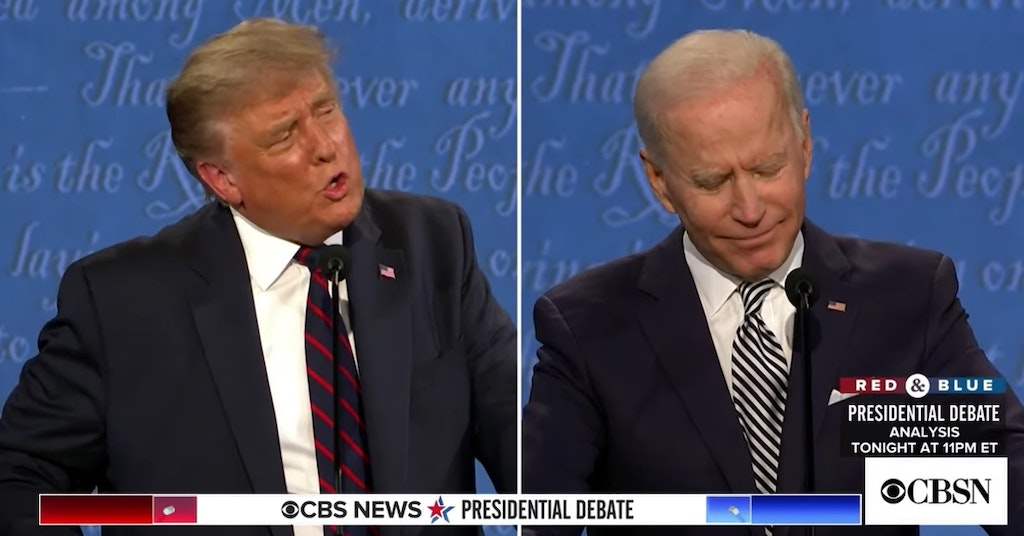 Depending on what end of the political spectrum you fall on, it’s possible that most people you follow on social media were perpetually exasperated with Donald Trump’s refusal to stop interrupting and talking over Joe Biden like a petulant child during last night’s presidential debate. If you live with roommates or in an apartment complex with thin walls, you very well may have even heard people yelling at their TVs, the whole thing was so ridiculous.

But one man expressed what we were all thinking, and that man was on the debate stage.

Arguably the most memorable moment of the whole night — outside of the President of the United States refusing to denounce white supremacy, that is — was Biden just flat out telling Trump to shut up.

The moment happened after Biden was asked a question by ineffectual moderator Chris Wallace about what he would do should he be elected after Trump and the GOP successfully rush through confirming a new Supreme Court justice.

Biden tried to respond that any stance he took would dominate the conversation rather than keeping the focus on whether the decision should wait until after the election is complete, but Trump continually interrupted him to complain that he won’t answer the question, rather than letting him say his peace.

That’s when Biden finally snapped and asked Trump to just shut up.

In any debate pre-dating the 2016 election, telling another candidate to shut up probably would have been wildly inappropriate. But when Trump refuses to abide by debate decorum, it’s difficult to judge anyone else by the standards generally in place for these things.

One could say Trump has, in fact, brought us to a whole new level of disrespect, and that single “Will you shut up, man?” is solidly representative of over half of American voters — not to mention all the international viewers watching in simultaneous amusement and horror at how our country has fallen.

As Trump spent the remainder of the debate continuing to interrupt out of turn, toss out lies as fact, and get away with all sorts of malarkey, Biden ended up having a few other choice responses to some of his nonsense, including calling Trump a clown.

And in case you were wondering, yes, there is already a t-shirt.