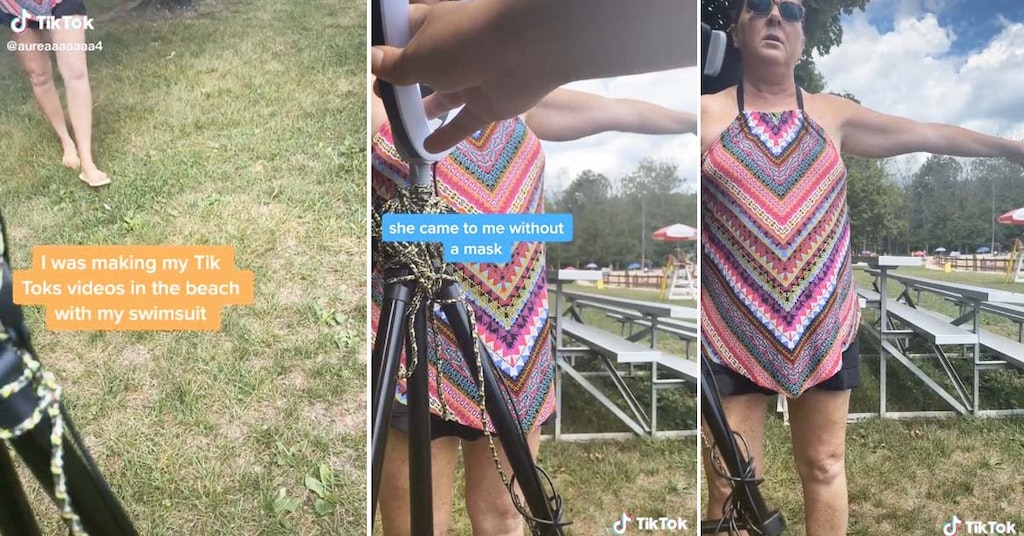 
It seems we can’t go more than a day without a so-called Karen popping out of the woodwork to flex—well, whatever it is a Karen flexes. (911 on speed dial?) In this latest instance of Karening, a popular TikTok user named Aurea Miranda was filming videos for the platform at Freedom Lake, a public park in Pleasant Valley, New York, when a woman approached her (sans mask, naturally) and ordered her to cover up.

Miranda, who is from Mexico but currently lives in New York City, was already in the process of filming when the unnamed woman approached her.

“Do you see those boys over there,” the woman asked. “Those are my boys, and they’re staring at your a**, which is hanging out in the middle of a public place. Do you need a pair of shorts? Because I have an extra pair.”

At this point, Miranda, who was wearing a string bikini bottom, with polite confusion, asked her what she meant. “I mean get your a** covered,” the woman fired back. “That’s what I mean.”

When Miranda asked if she was perhaps violating a rule, the woman accused her of being nude. “Yeah, there is. It’s called nudity,” she ranted. “You can’t be nude on a beach. It’s a public place.”

As Miranda’s video went viral, it sparked heated discourse. Although some insinuated that perhaps the swimsuit was perhaps a bit skimpy for a family beach, others pointed out that the real takeaway here is that ol’ Karen here should maybe be teaching her damn kids not to ogle and stare at women. It’s unclear how old her boys were—but mommas, it’s never to early to start teaching for sons not to be creeps!

In a couple of follow up videos, Miranda indicated that she was proud of her heritage, but also stated that she had moved to the United States to feel safe as a woman—which may or may not have occurred on the day in question.

With any hope, when this Karen sees her face plastered all over the internet for harassing a young woman just trying to live her life, this will be a “teaching moment” for her.