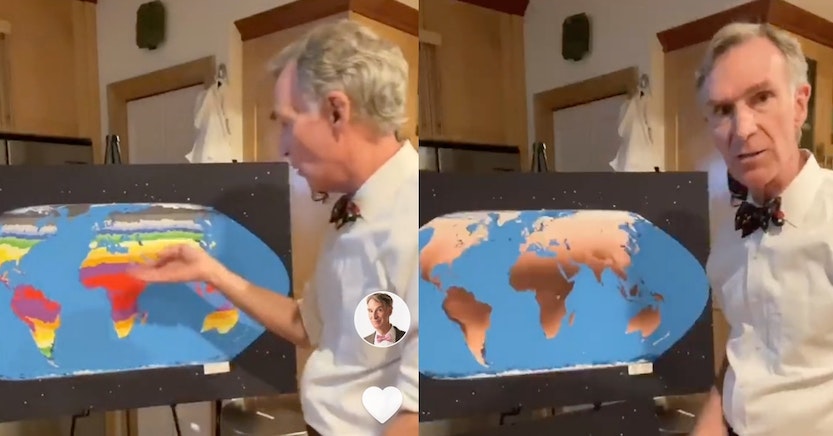 Bill Nye the Science Guy is doing what he’s always done best and using science to explain something everyone could stand to learn — why racism makes no sense.

Specifically, Nye shared a brief TikTok video diving into how it’s illogical to judge anyone based on the color of their skin because there’s scientific reasoning behind each shade.

“It turns out, the closer you are to the equator, the more intense the ultraviolet [light],” the host said, sharing a color-coded map of the world to represent the different intensities of light.

He then showed viewers a second map, and explained how people’s skin color began to lighten as humans moved away from Africa, and away from the equator.

“It turns out that everybody on earth is descended from people that live here, in Africa,” Nye said. “And then as groups of us move around the world, the color of our skin had to change, and here’s why.”

Now we get to the real science-y goodness.

“And because the ultraviolet varies, the color of our skin varies.”

Of course, understanding the science behind different skin colors isn’t going to solve racism, and our society is in a dark enough place that racists would never actually care that we’re all descended from the same ancestors.

But it’s still nice to have someone like Bill Nye the Science Guy break at least the science parts down for us in a way that proves what most people already know — racism doesn’t make any sense at all.