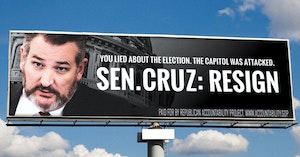 Despite the fact that the attack on the Capitol only happened earlier this month, Republican lawmakers are ready to move on.

More specifically, they’re ready for Democrats and the American people to stop holding them responsible for their divisive words and actions that allowed so many of former President Trump’s supporters to fall for the lie that the election was stolen. “Unity,” in their minds, is sweeping their deeds under the rug rather than facing accountability for something that threatened the very fabric of our democracy.

But many people throughout the country believe such an audacious dismissal of what some have even considered treason is wildly inappropriate — including some Republicans.

The Republican Accountability Project is launching a series of billboards that call on certain Republicans in the House and Senate who voted to reject the results of the 2020 presidential election even after the Capitol was attacked to resign.

A dozen GOP officials are said to be targeted by the billboard campaign so far, which will place these billboards in the districts or states they represented.

Among them are Senators Ted Cruz and Josh Hawley, who led the charge to reject electoral votes for President Biden, Senate Minority Leader Kevin McCarthy, who recently flew down to Mar-a-Lago to pal around with Trump, and newbie representatives Marjorie Taylor Greene and Madison Cawthorn, neither of whom seem to have any comprehension of the Constitution.

According to the group’s executive director, longtime Republican Sarah Longwell, the billboards will target “people who are the most enthusiastic about lying to their constituencies about the election being stolen.”

“They have a mantra of move on but we’re not going to let them move on,” she added. “Accountability is a prerequisite to unity.”

This isn’t the only campaign dedicated to calling out Republicans who loudly backed Trump’s lies about the election.

Really American PAC is currently raising money to put up giant red “TRAITOR” billboards in Cruz’s hometown, to remind the people who vote for him that he played a serious role in the attempts to undermine democracy.

MeidasTouch is doing something similar.

And people in Texas have already reported seeing some billboards demanding accountability from Cruz in the state.

It’s unclear if these are from the Republican Accountability Project or not.