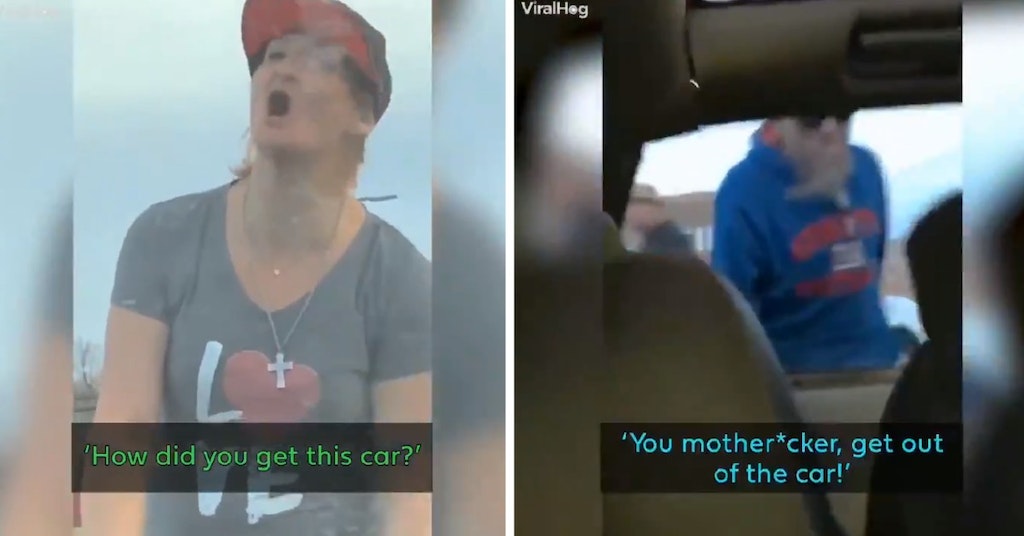 An intense video showing a mob of white individuals surrounding and attacking a car with a Black family inside in Spokane, Washington went viral after the driver, Lee Allen, posted it online. The video begins in the parking lot of a Walmart as a white woman is standing in front of the vehicle, blocking Allen and his two children from leaving. As his daughter records, bystanders begin to gather as the woman repeatedly claims that the car belongs to her.

Driving a nice car while black. More info in comments. from ActualPublicFreakouts

Allen tries to drive around the woman but is stopped by another pedestrian who then stands ominously in front of the car with his hand inside the front of his jacket. Allen’s son calls 911 as more people gather around.

A man in a blue sweatshirt, identified by local media as Lawton Miller, then approaches the driver door and opens it.

“Just to explain something,” Miller says in the video, “This is her car.”

“This is not her car,” Allen says before yanking the door shut again. This immediately enrages Miller, who starts screaming profanities and demanding the family exit the vehicle. Multiple banging sounds can be heard as Allen’s daughter starts crying. Members of the crowd can be seen banging on the windows, including one right next to the crying girl, and someone attacks the car with a bike.

Desperate to protect his children, Allen pulls the car away from the crowd, but one man jumps on the hood and refuses to get off even as the car is moving slowly away. That’s when Miller jumps on his motorcycle and starts following them, keeping dangerously close to the back of their vehicle as the girl recording sobs in terror.

Thankfully, the situation was resolved without anyone getting hurt. The Spokane County Sheriff’s Office told the local news station that the car did not belong to the white woman as she had claimed. Miller, meanwhile, claims that he followed the family because he was concerned for the safety of the man on the hood of the car.

“This kid jumps on the car. What do I do now? I’ve got to get this kid off the car,” Miller said. “I don’t know if this guy knows it who’s driving this car, (but) if this kid falls off and he runs over and kills that kid, he’s going to prison for murder. He’s no good to his family anymore.”

This does not explain why Miller immediately seemed to take the side of the white woman and screamed profanities at the family when rebuked. Allen says that his first priority was protecting his children, but he also didn’t want to hurt any of the people threatening them.

“I knew I was going to keep my kids protected no matter what,” he said. “If all else fails, I could just step on that gas pedal and shoot out like a rocket somewhere, but at the same time I didn’t want to hurt anybody.”

The intensity of the response from the white crowd attacking a car with children inside has people wondering if this would have happened to a white family.

Remember the feeling of helpless terror watching this video engendered in you and BELIEVE THEM.
Don't assume they're exaggerating. Don't assume it's a misunderstanding.
Minorities deal with this sort of shit on the regular.

No word on who’s paying for those kids’ therapy.