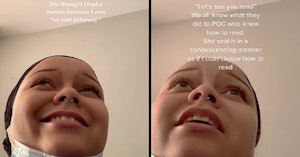 ‘They Will Forget Everything But Racism:’ Black Healthcare Worker Shuts Down Elderly Patient Asking About Her ‘Master’

A healthcare worker turned to TikTok after experiencing racism at her job, as a patient acted as if slavery was still in full swing.

@modestlymarleena kept the camera on her as a patient offscreen asked her something we can’t quite make out. But it prompted the TikToker to respond that she doesn’t have a “master.”

According to her text overlay, the other woman thought she “had a master” because she was “so well behaved.”

“They will forget everything BUT racism,” @modestlymarleena wrote.

The video also caught the patient telling her “let’s see you read,” to which the TikToker incredulously replied that she knows how to read.

“We all know what they did to POC who knew how to read,” she wrote. “She said it in a condescending manner as if I didn’t know how to read.”

Viewers were rightly appalled at the absurdly racist comments from the patient, elderly or not.

And @tragedies2triumphs noted that she experienced something similar before. “I told her, ‘Be careful what you say, honey. You’re meeting God soon & your judgment is coming.’ She was SHOOK.”

However, some people in the comments tried to excuse the woman’s behavior by saying she probably has dementia or Alzheimer’s — apparently forgetting the fact that there’s no way this woman was alive when slavery was legal. Segregation? Sure. But that’s wildly different from what she’s talking about.

“‘Slavery was so long ago!’ Old people in nursing homes: I remember it like it was yesterday,” scoffed @ratchetintellectual.

@modestlymarleena herself said that she wasn’t posting about dementia, but wanted to point out the “obvious racism embedded in this field.”

But, she added, “it’s up to us caregivers to change the narrative and fight hate with love.”