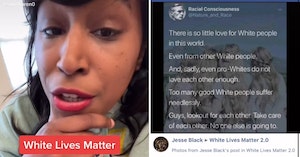 A popular Black TikTok user and anti-racist activist, named Denise Bradley but known online as “Aunt Karen,” has been making waves by infiltrating so-called “white lives matter” groups on Facebook to expose their content and ultimately hopes to bring them down with the help of her followers. In October, she made a video announcing that her account on one of these pages had been found out and banned after the group discovered her TikTok and posted one of her videos to their page.

Unfortunately for them, Bradley has at least three other fake accounts as members in that same group, along with an unknown number of accounts made by her followers for the same purpose.

“Okay, so I have this ‘white lives matter’ group that I’ve secretly infiltrated, but now they know I’m in there, but what they don’t know is that I have like four profiles in there,” she says, laughing. “So they kicked out one of my profiles, but there’s like a ton more, and all of you guys that are helping infiltrate this group, I love you.”

“So, look, we gotta take this group down.”

Bradley goes on to share some of the sad posts that racists have shared in their little racism group, including one lamenting a photo of Michael B. Jordan as Superman and one of her videos containing over 100 comments from people determined to find out who she is.

Five days later, Bradley was back on mission, showing more of the ridiculous memes and advertisements for other racist content that can be found in Facebook’s “white lives matter” clubs.

One woman, Cristina Walker, railed against an episode of Netflix’s adaptation of The Baby-Sitters Club because characters talked about donating their babysitting money to Black Lives Matter and The Trevor Project, which, according to Walker, “praises sinners that are gay.” Another post contained a meme showing a photo of some desperately impoverished part of the world, probably from a nation exploited by white people, ironically with text reading “imagine a world without white people.”

Bradley’s personal favorite is a tweet declaring that “there’s so little love for White [sic] people in this world. Even from other white people.”

The influencer is entirely unfazed by people from these groups trying to dig up information on her, and should probably be more nervous about her plastering all their names over the internet. Bradley told the Daily Dot that her goal is to deplatform these groups and make the real racists within feel as uneasy in their racist as possible.

“I want them to feel uncomfortable,” she said. “They shouldn’t be able to display so much hate and bigotry. They don’t deserve a space on any platform.”

So far, she appears to have been successful at taking down the “White Lives Matter 2.0” group, with Facebook confirming to the Daily Dot that it was removed from the platform for violating their community standards.

Bradley has continued to expose racists through her “Racist of the Day” video series, routinely gaining hundreds of thousands of views and generally being awesome.