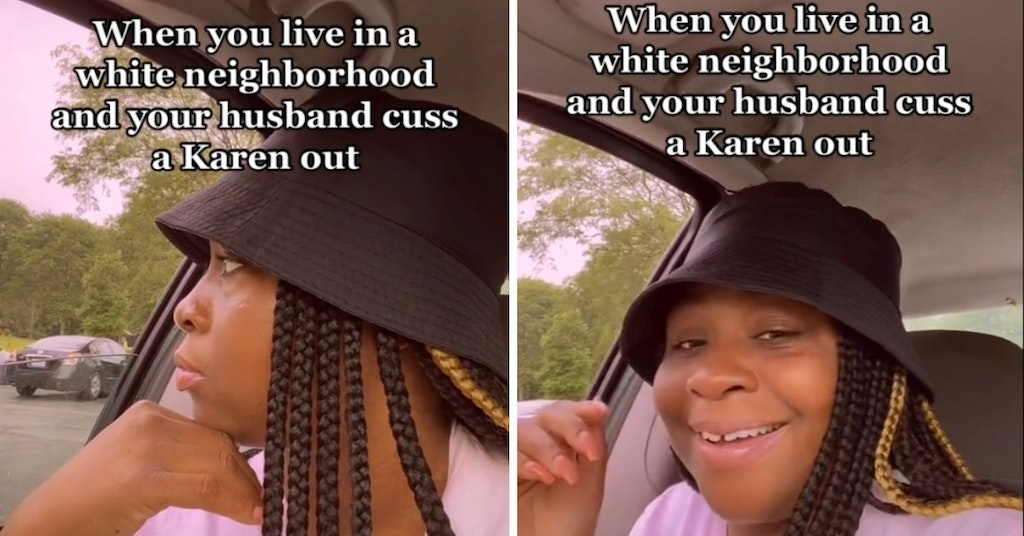 A video taken by a Black woman in her car as her husband lays down the most incredible roast on a white woman who apparently told him to “go back to Oakland” for some unknown reason, possibly just because he was jogging by her, has gone viral on TikTok. The footage only shows the Black woman’s reactions, ranging from passive observation to barely-contained glee while her husband can be heard rapidly tearing down the white lady in what should really be used as a reel for his future comedy career.

The video, posted by one Monique Upchurch, has earned over 1.5 million views after being posted on Sunday, and it’s pretty clear why.

From what we can gather from the audio alone, Upchurch’s husband was running somewhere when the white woman, who seems to say that she is 80-something (which is supported by how much the guy calls her wrinkly), says the racist thing she said. This prompted what has been called a “master class of insults.”

And that’s just the first few seconds. The man then blames women like her for spreading COVID-19 around the country, possibly saying something about her not wearing a mask, but it’s hard for our inferior brains to keep up with the rapid pace of his masterful insults. And when the woman tries to object to the language he’s using, she barely manages to get a word in before he’s roasting her even harder.

“Can you control your mouth for one minute…” she starts.

“You need to control your a–, because it stink,” he shoots back, earning a grin from his wife. “You need to get a wheelchair.”

She then seems to try to defend herself by stating her age even though it’s clear the man is already aware that she is old, and he tells her to act her age and accuses her of racism.

“Act like you’re 80-something years old then. Your age don’t matter. You seem like you’re racist, because you see me riding by and you tell a Black person to go back to Oakland. So it’s Black people in Oakland, right? Ain’t no Black people in Alameda?”

The woman sounds like she’s trying to say something about the proportion of white people who live in Alameda, California, but is again cut off.

“Well get your dusty-a– wrinkled bag trash face-having a– up out of here. Don’t tell no Black person to go back to Oakland. You can’t tell me where to go, alright?”

If the comments on the TikTok video are any indication, this man may end up winning the gold for best roast of the year.

“I love that the insults just rolled off his tongue,” said one user.

“That was a master class of insults,” said another. “Shakespeare would be proud.”