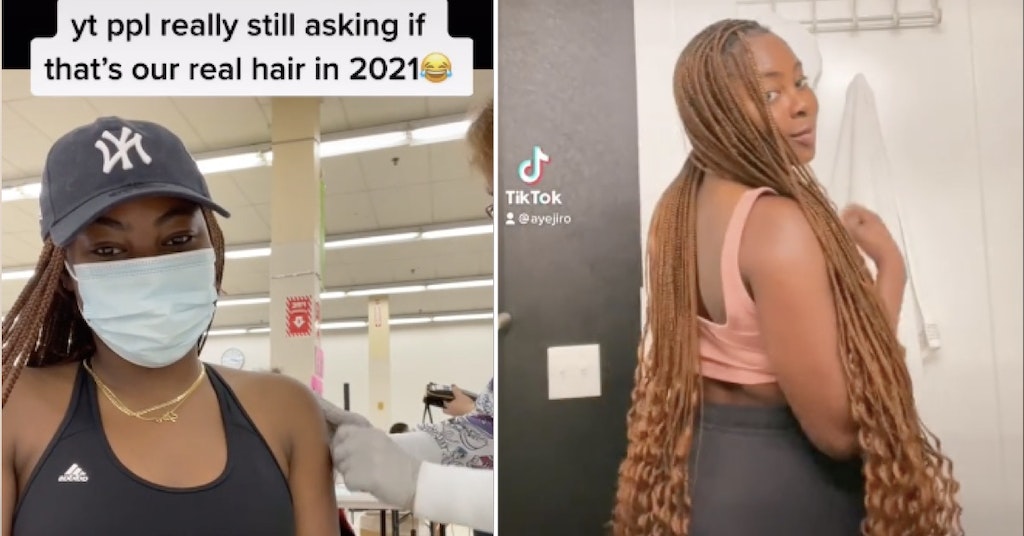 A TikTok made by user @ayejiro, or Ejiro, caused quite a debate in the comments by just presenting a moment in her life where she experienced a micro-aggression at the hands of her vaccination technician. It seems unlikely she expected to catch the white technician in a moment like that, so I assumed she set her camera up to record the momentous occasion of getting her vaccine. She got so much more.

As the tech walks around preparing to administer the shot, she asks the TikToker, “Is that your own hair?”

She doesn’t snap at the tech, instead she uses it as an opportunity to mess with her, saying the long braids are real and her parents haven’t ever cut it since she born in 1999. The tech seems to believe all that, as far as I can tell. Over the short clip, Ejiro wrote, “yt ppl really still asking if that’s our real hair in 2021.”

You can’t really see how long Ejiro’s hair is in the video, but other TikToks on her page show that they are astonishingly beautiful and she puts a lot of care into them:

Commenting on a Black woman’s hair is definitely in the “NO” column, as is touching of any kind, but every day it’s revealed how many white people still haven’t gotten the message. It’s especially evident in the comments, where a number of people seem to have logged in just to tell her what the tech said was okay. Some insisted that the tech was trying to be nice, or that she would have asked another white woman the same thing:

There were also some people who had the sense to understand that a compliment would probably stop at “I love your hair” with no implication about it being “real” or not, whatever that means.

“If a whole race of people says ‘we don’t it like it when you say_’ and you still constantly say it then no you aren’t doing it right,” said user Jennelle Grady.

I don’t know if the technician will finally get this idea through her head. It seems unlikely that she is on TikTok.