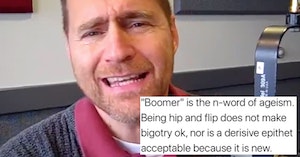 The generational war between boomers and millennials has been raging for some time, mostly on the places on the Internet where boomers don’t often go. Like Reddit. Mocking boomers has helped millennials blow off steam after reading yet another article about how they’re killing old industries by not spending like their predecessors.

The reality is that the baby boomer generation grew up in a time of economic prosperity, when it was possible to buy a house, hold down the same job for decades, and expect health and pension benefits, all without being saddled with astronomical student loans. That’s simply not the case for those who came of age around the aughts.

saying “ok generation that disemboweled the economy and environment for short term wealth, fucking the rest of us for all of eternity”

-passionate
-too many words for boomers to understand

But the conflict was made much more public when it was written about by journalist Taylor Lorenz in The New York Times, the paper of choice for boomers.

Lorenz detailed how “okay boomer” has become the dismissive catchphrase of a generation, and it basically ruined her inbox, as irate boomer after irate boomer emailed her about her thoughts:

If you're wondering what the "Ok Boomer" thing is all about, read this by @TaylorLorenz. https://t.co/gJI4PDnrUB

All these boomers are discovering how much people hate them, and they sure don’t like it! That’s what happens when you destroy the planet and then spend the weekends hate-tweeting at Greta Thunberg.

There were a lot of terrible responses to Lorenz’s story, but the worst take might be from radio host Bob Lonsberry, who wrote in a since-deleted tweet, “‘Boomer’ is the n-word of ageism. Being hip and flip does not make bigotry ok, nor is a derisive epithet acceptable because it is new.” 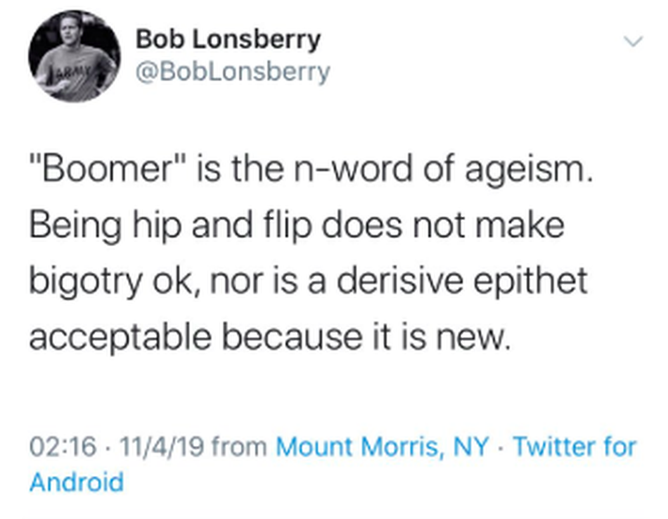 Comedian Jaboukie Young-White might have had the best response to that: 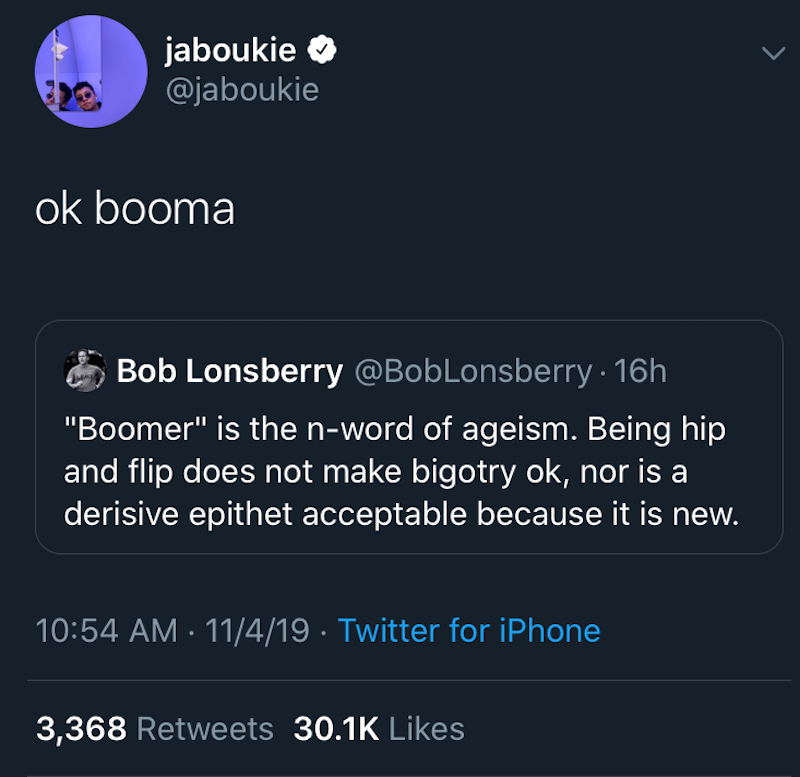 Yep, the n-word is in no way comparable to “boomer,” as many, many people quickly pointed out, dragging Lonsberry’s idiocy on Twitter, starting with the actual dictionary:

Boomer is an informal noun referring to a person born during a baby boom, especially one born in the U.S. between 1946 and 1965.

The n-word is one of the most offensive words in the English language. https://t.co/30OAf7N83e

You know you messed up when the Dictionary has to step in. Lots of other people made good points and good dunks:

hey just saw that guy that said “boomer is the n-word of ageism” and i would like to provide a quote from the only white man i trust pic.twitter.com/hFlYPUDvpI

How about blessing all the people you offended with your idiotic comparison of boomer to the n-word with an apology, Bob?
Let us behold the sacred process of you possessing an iota of humility. pic.twitter.com/9NkyEeS6Xh

No one should take this boomer seriously btw. He's clearly just itching to say the n-word. pic.twitter.com/Q6GNzhAH2o 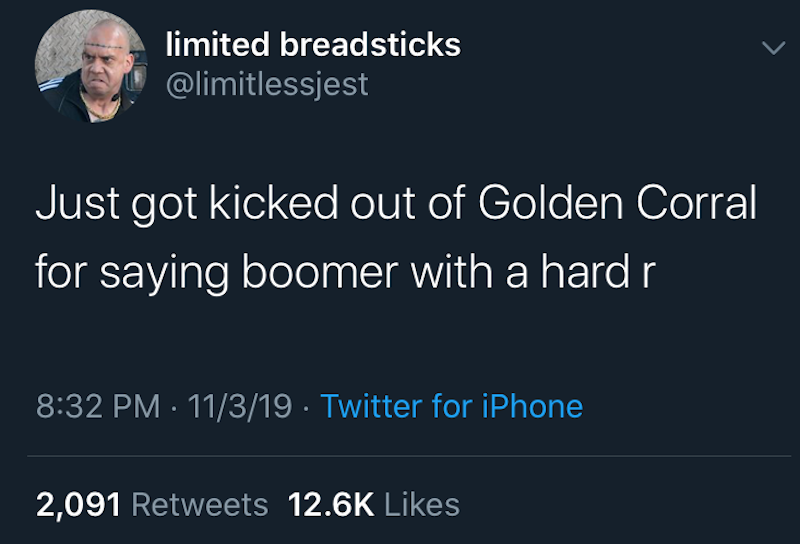 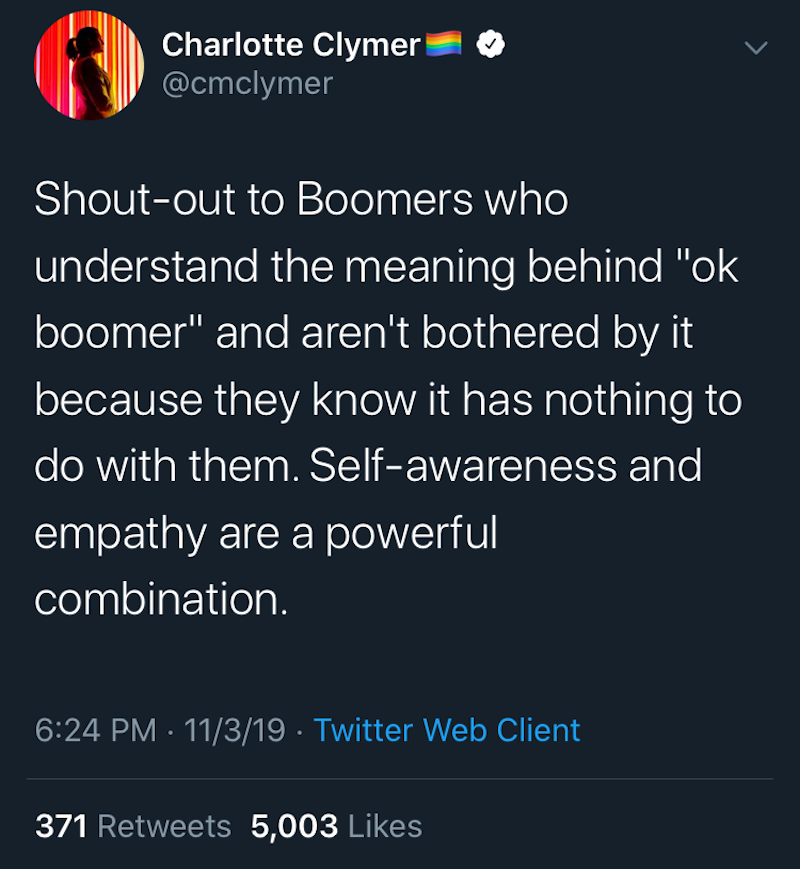 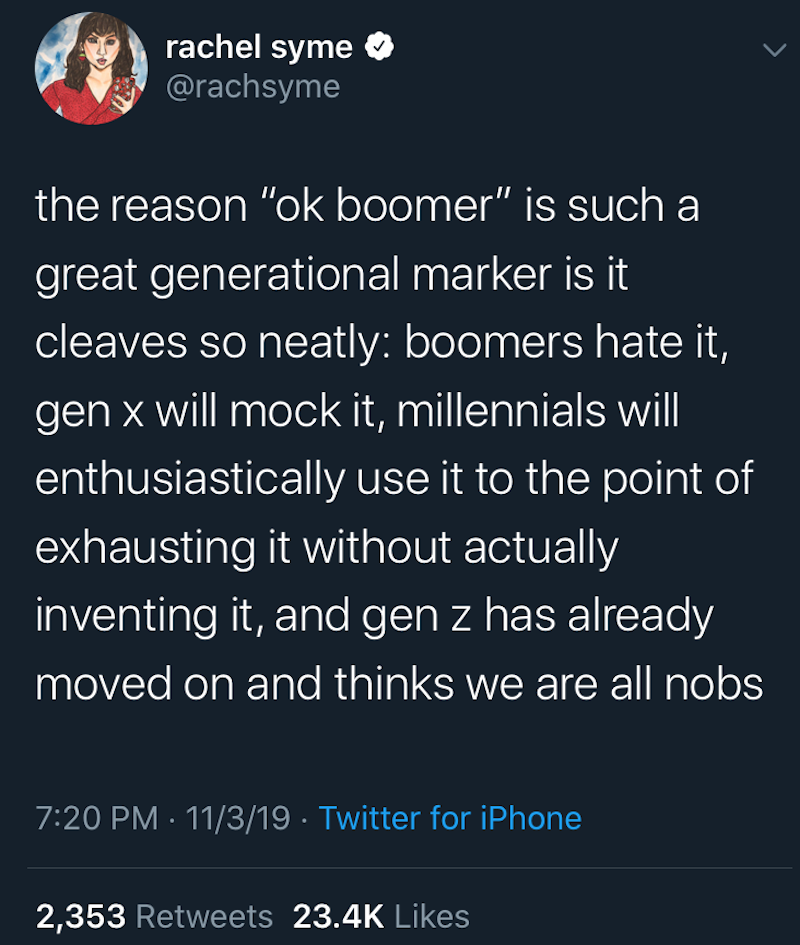 Boomer can definitely be used as a derogatory term, but it refers more to attitude than age. If you’re losing your sh*t over the word “boomer” and comparing it to systemic racism and violent white supremacy, you’re definitely a boomer in the worst possible meaning of the term.