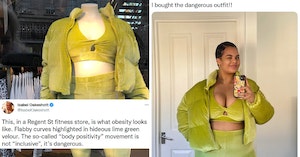 A U.K.-based journalist went somewhat viral over the weekend after posting a photo of a mannequin meant to be “plus-sized” in an outfit that is probably just a size 16 or 18 (the U.S. average for cisgender women) and using it to claim that the body positivity movement is “dangerous.” Isabel Oakeshott, who has worked for right-wing news outlets such as GB News, The Sunday Times, and Sky News, slammed the fitness store mannequin and the outfit it was wearing as “what obesity looks like.”

“This, in a Regent St fitness store, is what obesity looks like,” she tweeted. “Flabby curves highlighted in hideous lime green velour. The so-called ‘body positivity’ movement is not ‘inclusive’, it’s dangerous.”

This rather extreme response to a fake body displaying athletic wear designed for women of average size rather than the usual body standard that’s impossible to achieve for 99 percent of actual human beings attracted quite a lot of attention, most of it mockery. Some expressed amused bafflement over how a plastic mannequin could be “flabby” while many others wondered exactly what is supposed to be so “dangerous” about lime green velour.

All joking aside, Oakeshott was only repeating a very common sentiment among people lucky enough to be thin in a world that has increasingly hated fat people to the point that eating disorders have reached alarming levels among young girls, reaching back to per-adolescence. In spite of a widespread hysteria over the supposed dangers of “obesity,” it’s the desperate desire to be thin that directly causes far more deaths in young people than kids being fat.

In recent years, studies have challenged the assumption that being fat is unhealthy, finding that individuals classified as “overweight” according to that weird awful BMI thing tend to live longer than those considered “normal” or thin. Others have found that the stress related to poverty is what tends to kill people via heart disease and other issues previously connected to certain levels of body fat. Poverty and “obesity” are positively correlated as the poor can only afford low-quality food associated with weight gain.

An increasing amount of evidence has also emerged that except in very rare cases, dieting does not work, even with the benefit of exercise.

At the same time, those classified as “overweight” or “obese” have begun to fight back, embracing the “fat” descriptor and declaring that no one has the right to determine someone’s personal value based on body type, condemning the common practice as fatphobia. This movement, sometimes referred to as “body positivity” and other times as “fat acceptance” or something similar, has resulted in a serious backlash as misinformed thin people claim that learning not to hate oneself for one’s body type is “dangerous.”

It’s gotten to the point that fat human beings can’t post photos of themselves existing without being accused of “glorifying obesity” and basically murdering people.

The irony of doing so about athletic apparel while thin people continue to scream that fat people just need a bit of exercise to become thin (which is untrue the vast majority of the time) has not been lost on most commenters. That and the absurdity of this woman freaking out over a mannequin. One woman — a fashion designer herself — went so far as to locate and purchase the same outfit and take a photo of herself looking fantastic in it.