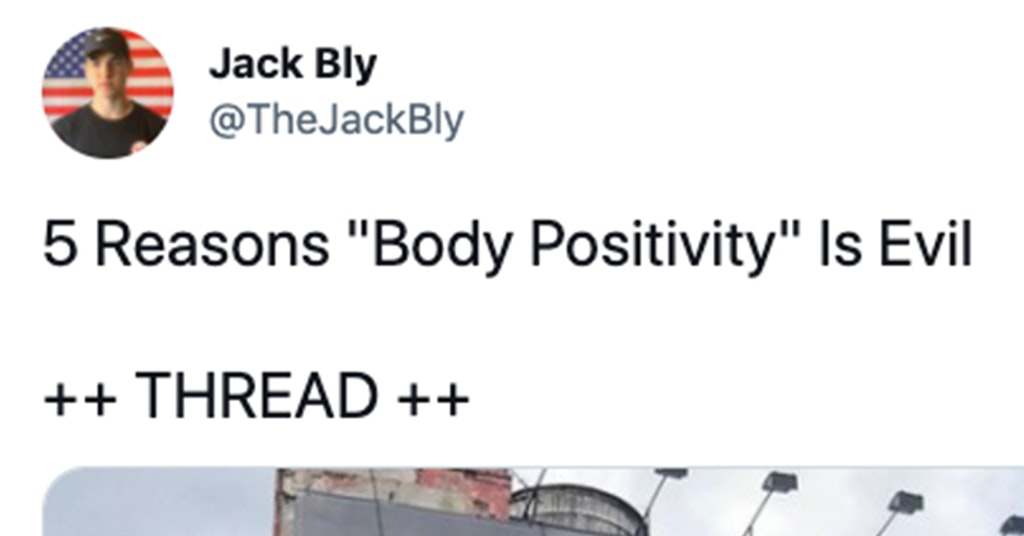 The idea of body positivity has been controversial since it first started becoming popular online, due in part to everyone having different understandings of what, exactly, it means.

Fitness guy Jack Bly posted a thread to Twitter this week ripping the idea of body positivity apart as “evil,” and sparking a heated debate among responders.

His thread had five points, all revolving around the idea that obesity is detrimental to individuals, families, and society itself. It “puts you at a greater risk for stroke, diabetes, heart disease,” he said.

Bly also posited that kids are growing up believing other potential side effects of obesity (low libido, low energy, early death, high medical costs) are “the NORM,” and lamented the possibility that obese people have lower focus, energy, and productivity, thus hindering the economic growth of the entire nation.

“I’m of the opinion that we should tell people the hard truths rather than lie to their faces,” Bly said, additionally complaining that the “DISGUSTING trend” brought on by “PC Culture” includes prioritizing feelings over facts.

A number of people agreed with Bly’s tweets, saying that the body positivity movement has somehow gone too far.

But body positivity isn’t exclusively about obesity, and it isn’t about ignoring potential health risks.

Some users were quick to point that out, reminding Bly and anyone else reading that body positivity is often about striving to be the healthiest version of yourself while not constantly beating yourself up about the way you look—and that what constitutes “healthy” IS going to look different on everyone.

Bly ultimately ended his thread with an advertisement for his “body transformation program,” which brought context to his decision to ignite the debate for some.

Either way, he’s already moved on to encouraging folks to “embrace Toxic Masculinity,” which actually makes a lot of sense. And yes, that, too, is an advertisement for his program.