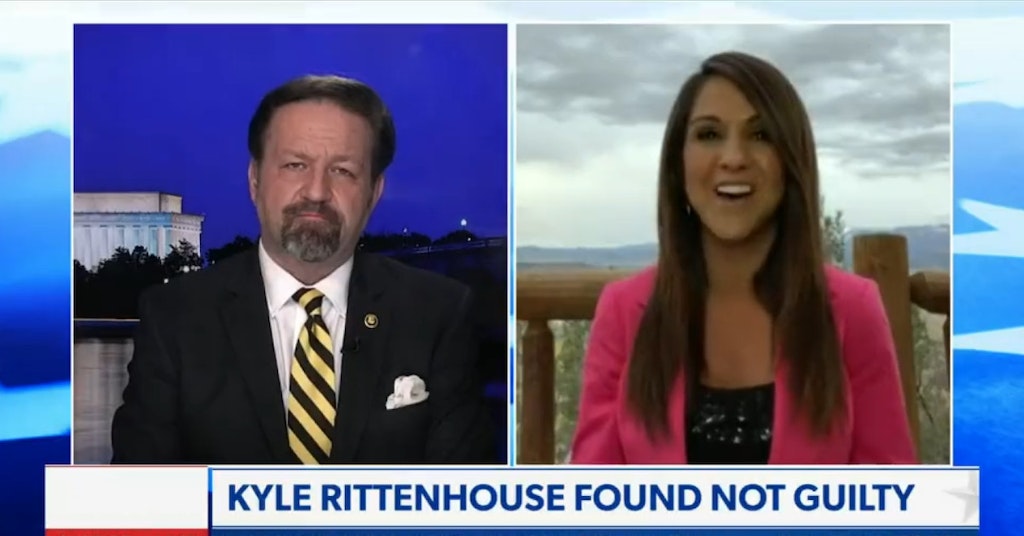 U.S. Representative Lauren Boebert made a rather unfortunate mistake and/or “joke” during a Newsmax interview that was already horrifying as she talked about challenging a fellow member of congress for the right to hire Kyle Rittenhouse as an intern. Boebert, known for her extremely pro-gun and far-right stances, is of course among the wing of the Republican party who has unequivocally sided with the man who crossed state lines with an AR-style rifle at age 17 and killed two and injured one after walking around with his deadly weapon in the middle of the Kenosha uprising.

Among those Republicans is Rep. Madison Cawthorn, who reportedly challenged Boebert to an arm-wrestling contest to win the privilege of hiring the man who was photographed giving the white power symbol in a bar while celebrating his release from jail with a bunch of Proud Boys. Boebert, however, worried that Cawthorn would be too strong in the upper body for her, so she had a different idea.

“Now I do have some colleagues on the Hill who have, just like me, offered Kyle Rittenhouse an internship in their office,” said Boebert to Newsmax host Sebastian Gorka, “and Madison Cawthorn, he said that he would arm wrestle me for this Kyle Rittenhouse internship, but Madison Cawthorn has some pretty big guns, and so I would like to challenge him to a sprint instead. Let’s make this fair.”

The problem with this, of course, is that such a contest would hardly be fair considering the fact that Cawthorn was in a car accident at age 18 that left him partially paralyzed and reliant on a wheelchair — something that is visually apparent to anyone who sees the congressman in person, as you would expect from a coworker.

It’s unclear whether this was some kind of poorly thought-out joke that is effectively a middle finger to disabled people everywhere or if Boebert has once again been caught being just that stupid. Gorka, not about to be out-weirded, responded by offering to arm wrestle Cawthorn in her place.

Of course, being disabled does not exempt anyone from being racist or generally horrible enough to not only offer Kyle Rittenhouse an internship but encourage his right-wing supporters to go out and shoot more people, as Cawthorn did following the acquittal on an Instagram post.

“Kyle Rittenhouse is not guilty, my friends,” he said in a video. “You have a right to defend yourselves. Be armed, be dangerous and be moral.”

And then, when you inevitably kill someone with your extremely deadly weapon, claim self-defense and cry about it.

Attacking someone’s disability is never justified, however, and it’s pretty hard to excuse forgetting that your so-called colleague uses a wheelchair daily, so of the two, Boebert is coming out looking like the worst of the two in this case.