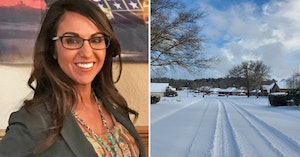 Republican Representative Lauren Boebert, who is trying to make a name for herself as the most annoying pro-gun member of congress, somehow managed to blame the rolling blackouts in the South on the Green New Deal, which has not passed into law.

The power outages resulting from a massive drop in temperatures across the bulk of the country have left millions in the cold as ice and snow blanket states unprepared for this kind of weather.

Instead of doing anything useful, Boebert blamed a non-existent “oil and gad ban” and renewable energy sources that have gone largely unused in the U.S.

“Rolling blackouts from ND to TX have turned into lengthy power outages in freezing conditions,” she tweeted. “Biden needs to lift his oil & gas ban as we need reliable energy sources. The Green New Deal was just proven unsustainable as renewables are clearly unreliable.”

President Joe Biden has not only not implemented any kind of ban on oil or gas power, but he has also drawn the ire of climate change activists for vowing that he won’t even ban fracking.

The Green New Deal is a set of ideas proposed by the progressive wing of the Democratic party but never passed into law. Republicans forced an early vote on a resolution for the deal in 2019 in what Democrats panned as a political stunt, and it was defeated with all Democrats voting “present” in protest.

Experts have proposed a number of potential causes for the current energy crisis, including the widespread privatization of electrical grids in states like Texas, with few to none blaming a man who has been president for less than a month. Biden’s Interior Secretary has yet to be confirmed by Congress, so many have pointed out that if any president is to blame, it would be Trump.

Others have noted that the real problem here is definitely climate change, which is fueled by the burning of oil and natural gas and is exactly what the Green New Deal is designed to fight.