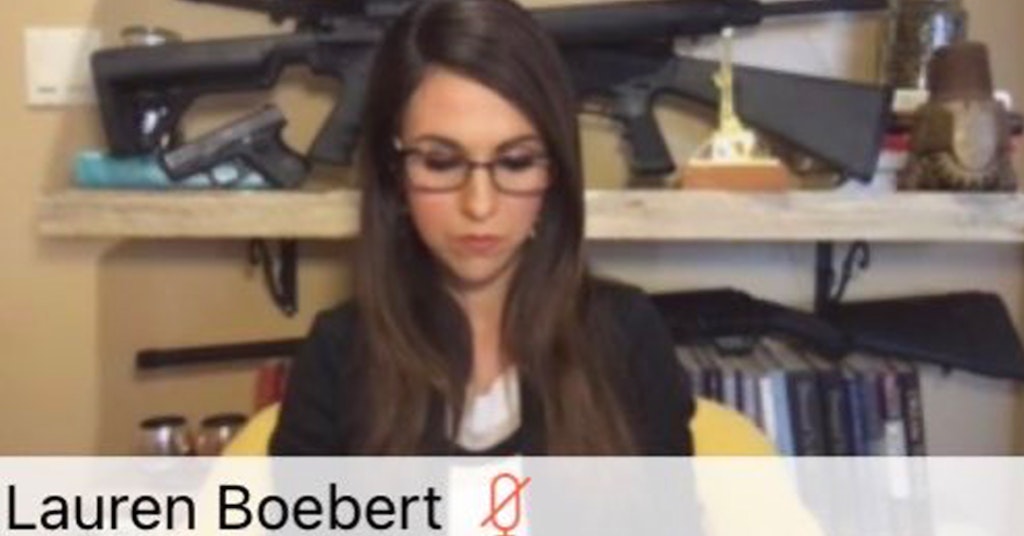 
Representative Lauren Boebert is having a hard time gaining a reputation as the member of Congress who is the most into guns after she created a rather gratuitous display of guns behind her for a virtual committee meeting.

For the meeting, which was to consider a rule restricting firearms in the House hearing room, she stacked a number of different guns on her bookshelves in a manner that real gun fans have panned as unsafe.

Boebert, of course, was against the proposed rule, though its proponents pointed out that it's simply upholding a restriction that has already been in place for years.

"Here's the reality: If somebody wants to have a shrine to their gun fetish as a Zoom backdrop in their private life, they can do that," he said. "But this is our hearing room. And at some point, we will get past the COVID epidemic, and we'll all start showing up in person. And our safety and our ability to conduct business civilly without feeling threatened is a relevant consideration, unfortunately."

Other representatives also pointed out the stark lack of gun safety practiced by Boebert and her leaning tower of deadly weapons, with Jason Crow calling it a "political stunt" and tweeting a photo of his gun safe.

Boebert, of course, fired back at some of her critics, thankfully with tweets and not bullets even though she said that the guns she displayed were "ready for use." She did not specify what imminent threat there was in her home while she was supposed to be working.

Aside from getting the worst review possible by Room Rater, people are also comparing the images of Boebert with her absurd gun background to videos put out by literal terrorists who are trying to look tough. The difference is that some of those terrorists had more books on their shelves than the junior congresswoman.

Others decided to troll Boebert with their own bookshelf displays for their virtual meetings, including feminist writer Geraldine, who decorated her shelves with something that most Republicans hate to see.

Those pads should offer Geraldine a whole lot more protection than Boebert's guns could offer her, since she lives in a rich neighborhood and the greatest threat to her is the ratio on her terrible tweets.