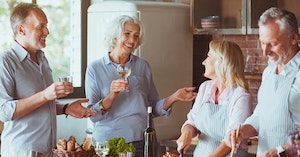 For reasons far beyond the limited reach of human comprehension, a popular media outlet has published an article that would have been tired in 2015 in which Baby Boomers give the same financial advice that young people have been mocking for years. The Times, a rather large paper over in the U.K., says that these Boomers think Millennials could magically afford housing in this utterly ridiculous market if we just stop ordering out and cancel our Netflix subscriptions.

“Baby boomers have some advice for millennials struggling to buy a home: cancel the Netflix subscription and stop ordering takeaways,” the paper tweeted, using the U.K. word for takeout.

It’s unclear if this article is the result of some kind of mass amnesiac event or if it was created purely in the interest of attracting a ton of hate clicks, because Millennials and Zoomers are still making avocado toast jokes over here.

We all know that ordering takeout on a regular basis can be expensive, adding an extra $10 or $15 to a meal already more costly than making your own food at home. However, even saving the extra $40 per week or so by never ordering out would not come anywhere close to allowing people to save up for a down payment on housing that recently hit a record high average price of £278,436 in the U.K. That’s about $333,335.

In the U.S., the problem is significantly worse. The national average here recently reached a record high of about $507,800, and that number can jump by hundreds of thousands around major cities. Nobody’s saving up a down payment of $100,000 by ditching the takeout, and a Netflix subscription only costs $10 per month for the basic package. Assuming an average human lifespan of 80 years, a person saves a grand total of $9,600 by never having a Netflix subscription.

The article suggests that the majority of Boomers still refuse to acknowledge the reality that today’s world is not the same one that they grew up in, when the government paid for their college education and living expenses could be covered easily by one full-time salary. In spite of getting mocked relentlessly for it, more than half the boomers surveyed by King’s College London researchers still believe that what they consider “luxury” items are what is keeping their kids from being able to afford homes.

“More than half of baby boomers, those born between 1946 and 1964, believe that ‘luxury’ lifestyle choices made by young people are to blame for their inability to save enough money,” The Times reports. “Among the lifestyle choices identified by baby boomers in a study by researchers at King’s College London were takeaway coffees and food, mobile phones, Netflix and foreign holidays.”

If you’re in the U.S., just scratch “holidays” off that list and pretend you didn’t see it.

It seems that the message hasn’t quite gotten across, so the younger generations have renewed their mockery game and are coming for this article with everything they’ve got.