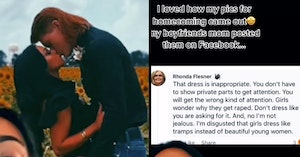 Boomers Shamed A Teen’s Homecoming Dress On Facebook, So She Shamed Them Right Back On TikTok

A teenager who set out to enjoy her school’s homecoming dance instead found herself dealing with hate from boomers on Facebook who thought slut-shaming a teenager over her dress was an appropriate thing for an adult to do.

Grace Brumfield told BuzzFeed that after she and her boyfriend, Zach, went to a field of sunflowers to take pictures in their homecoming attire, his proud and excited mother shared them to a flower-themed Facebook group she’s in.

But while many of the comments were positive, there also wound up being a slew of negativity, largely from older women who felt it was necessary to comment on the length of Grace’s dress.

“She was talking about all the nice comments, and then she said, ‘And of course, there are the negative ones as well,’” Grace recalled. “My heart kind of immediately sank because I felt so confident about my appearance and attire that night…I have been picked on my entire life — my freshman year, I moved schools because it got so bad.”

Grace eventually looked up the comments for herself to see what people were saying, and was shocked enough that she decided to turn it into a TikTok, turning the tables and shaming the people who decided to shame a teen girl.

“Did her parents see her in that?” one comment from an Ava Detschermitsch asked. “Way too short and looks trash on such a pretty girl. Leave something to the imagination, no need to put it ALL out there.”

Another from Rhonda Flesner escalated things dramatically, calling the dress “inappropriate” and saying “you don’t have to show private parts to get attention.”

“You will get the wrong kind of attention,” she wrote. “Girls wonder why they get raped. Don’t dress like you are asking for it.”

Grace was appalled that “mothers and grandmothers” would say those kinds of things about a teenager over literally nothing more than a dress they personally felt was too short, and viewers of her now-viral TikTok agreed.

“Parents are so concerned about bullying yet are fine with it when it’s their middle-age-self bullying minors on Facebook,” @shoona825 observed.

“Not every last one of them sexualizing you while calling you a child…” wrote @ashley_98syra.

And of course, people also readily pointed out what everyone with half a brain already knows — that sexual assault has absolutely nothing to do with what a person is wearing.

“It happened to me in sweats and a hoodie…clothing don’t matter,” one viewer said.

The original post has since been deleted from the Facebook group, but Grace also added that her boyfriend’s mother was sticking up for her in the comments until then. And regardless of what some rude boomers on Facebook had to say, she told BuzzFeed her homecoming was a wonderful experience and she received plenty of compliments on her dress.