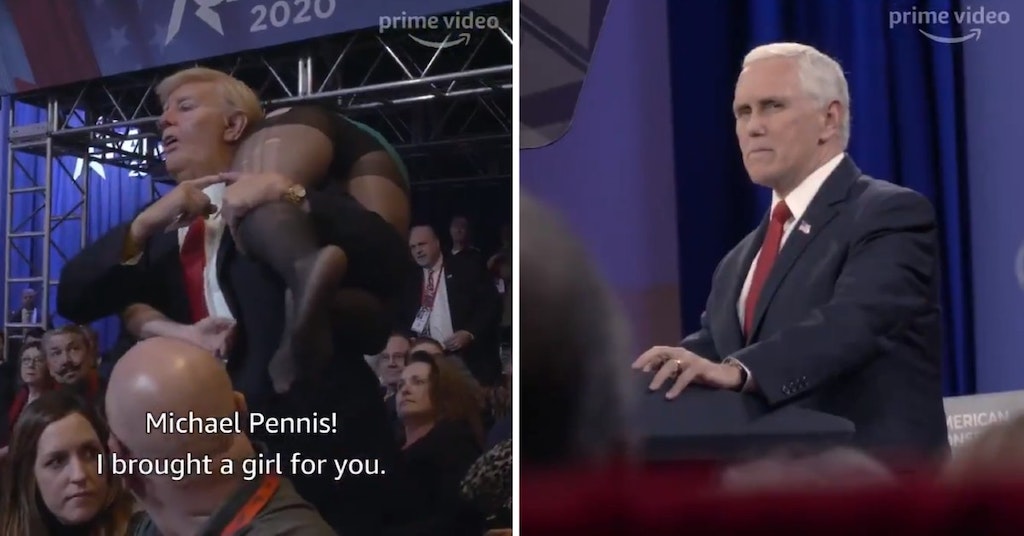 
The rumored sequel to the 2006 film Borat: Cultural Learnings of America for Make Benefit Glorious Nation of Kazakhstan has been officially confirmed by a trailer that dropped Thursday, which seems to show Sacha Baron Cohen in a full Trump costume pranking Vice President Mike Pence. The sequel, titled Borat Subsequent Moviefilm: Delivery Of Prodigious Bribe To American Regime For Make Benefit Once Glorious Nation Of Kazakhstan, was filmed secretly in 2020 and features Borat’s daughter, who he plans to gift to Pence.

It will be released on Amazon Prime Video on October 23.

The trailer also shows Borat getting recognized and chased by fans, forcing him to dress up in disguise. Later, he ends up with his daughter in a Christian "pregnancy counseling center" masquerading as an abortion clinic after she accidentally swallows a plastic baby.

At another point in the movie, Borat finds a group of right-wing men who teach him about quarantining and the coronavirus, and also that Democrats are more dangerous than the virus itself.

This all culminates in the climactic moment in which Cohen, dressed in an almost convincing Trump costume, busts into the 2020 CPAC and runs into an auditorium while Mike Pence is giving a speech, all with his fictional daughter over his shoulder.

“Michael Pennis, I brought a girl for you!” he shouts. The camera then turns to Pence, who looks rather unhappy about the interruption.

While it may seem impossible that we didn't hear about Cohen pranking the vice president in a Trump costume at CPAC, perhaps the funniest thing about this is that we actually did. Conference-goers and media outlets reported on the costumed prankster with a woman over his shoulder "yelling about Trump and 'white supremacy'" near the front of the audience.

They just didn't know it was Cohen as Borat.

The Daily Caller even published a video showing him being shooed out of the room with what looks like the same woman from the trailer over his shoulder.

We'll have to wait until nearly election day to see the whole film, but the trailer is already getting rave reviews.