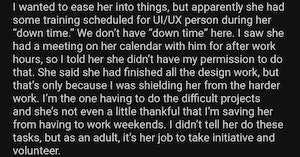 Boss Asks ‘AITA’ For Calling Worker A ‘B—h’ At Work, And He Is

It’s a bit of a rare thing to find an entry in Reddit’s “Am I The A–hole” forum where the answer gets anywhere close to straddling the line between a–hole and not, and a recent entry by a senior designer at a software company is no exception to this rule. He starts by claiming that he’s not really the “boss” of the young woman who works under him at the company that he indeed called a “b—h” during a work call, then goes on for three paragraphs about how he acted like he thought he was her boss and built up secret resentments about her.

“I’m not technically her ‘boss,’ but as her senior, I basically act as a substitute for one,” he says, describing what sounds like a personal choice he didn’t have to make.

But he’s acted in the “work dad” role before, he says, and it all worked out fine until along came this uppity woman.

“I was a little suspicious of this girl (24F) because she seemed to have different experience than someone who would’ve wanted to apply for this role (she majored in UI/UX), but we had a lot in common and she seemed friendly,” he says, revealing that he had a problem with her from the start. “I used to work as a team lead for a game design studio and managed a bunch of younger employees who kind of saw me as a ‘team dad,’ and she reminded me of the kids who used to work for me there.”

Not only did she have “different experience,” she also committed the crime of not being able to read his mind and know that if she’d completed all the work he’d given her, she should start working on the projects he’d been “shielding” from her. Instead, that ungrateful young lady was operating within the workplace based on the knowledge she had about the projects available, the lazy ingrate.

“She said she had finished all the design work, but that’s only because I was shielding her from the harder work,” he went on. “I’m the one having to do the difficult projects and she’s not even a little thankful that I’m saving her from having to work weekends. I didn’t tell her do these tasks, but as an adult, it’s her job to take initiative and volunteer.”

Is she an adult? Is she a kid? Is she somehow both and also psychic? What kind of superpowered yet lazy demon are we dealing with here, 40m senior software designer? Regardless, this guy sounds exactly like the kind of cluelessly horrible bosses we hear about so often over in Antiwork.

“I’ve tried to look out for her best interests and be a friendly boss, but I also have to remind her that I’m in charge,” he said, apparently forgetting that he is not her boss actually. “During a meeting, when I was having a really horrific day (mostly because I was picking up work she should be doing + stress of my wife’s pregnancy), I snapped and called her a b—h.”

This wasn’t a “gendered insult,” however, he claims, because it just slipped out. He’d never called a male employee that before and probably never would, but she just happens to be a woman and he happened to call her what is undeniably a gendered insult —certainly it has nothing to do with hating women, who remain sorely underrepresented in the software industry.

He’s so certain that he’s not sexist, in fact, that he acted like nothing was wrong for the rest of the day and was shocked to get a call about it from human resources.

“I got an email from HR saying that she had requested us (me, her, and HR) to meet about this ‘incident.’ I’m not sure what to do. My wife is saying that calling her a b—h was crossing a line, even if she’s lazy and doesn’t want to do her job, and I can see that it wasn’t the right move.”

He further accuses the young woman of being out of line and of being the problem in the office in spite of completing all of her assignments and using her extra time at work for additional training, something that decent bosses might recognize at that “initiative” thing.

To the surprise of no one, Reddit has resoundingly voted this guy to be the a–hole, and others in the industry or in workplace leadership roles in general offered some advice in short words and sentences for this genius.

It’s also no surprise what the people over on Antiwork think of this guy after his entry was inevitably cross-posted there.