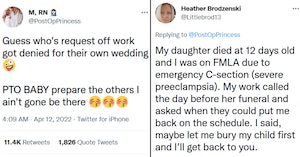 In the U.S., it can be difficult to even find a job that offers things that used to be considered the most basic of benefits, including paid time off that could actually be used for things like vacations and emergencies. Today, even if you can find a workplace that provides this simple benefit, managers often go out of their way to discourage any workers from using it, making a big stink when people try or simply denying the time off no matter the reason or how much advance notice they got.

It’s gotten so bad that one Twitter user announced they were denied the day off they requested for their own wedding, but decided that they were going to take the day off anyway, because it’s their wedding.

“Guess who’s request off work got denied for their own wedding,” they wrote. “PTO BABY prepare the others I ain’t gone be there.”

This tweet inspired many others to share their own stories of denied paid time off, particularly fellow nurses and other healthcare workers who are employed in a high-pressure and, judging by this thread, often toxic workplace environments. Twitter users told stories about being denied PTO for weddings, funerals for close family members up to and including their own children, and even for court dates for which they were subpoenaed to give testimony — something that is not optional.

A lot of people responded to the denial by either taking the day off anyway, quitting their jobs entirely, or, ideally, both. Other commenters encouraged their fellow workers to think of paid time off requests more in terms of warnings, because they are adults who know what they need and no job is worth putting up with bosses who think they own your life.

Here are some examples of the worst bosses out there who don’t deserve to have power over others: