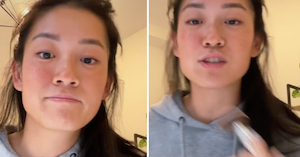 A TikToker says that her ex-boyfriend once charged her for medicine she asked him to pick up for her when she was sick. Jacki Li, from Hawaii, said her now-ex and she had been together for four years. So, when he sent her a Venmo request for $7 for DayQuil, she rethought her priorities.

“One time I was feeling really sick and I asked my boyfriend at the time if he could buy me some cold medicine on his way home,” Jackie said in the viral video.

Jackie said she realized that keeping track of expenses like that was not something she was interested in doing: “I think I prefer a relationship where it’s like, ‘Hey, I’ll get this, you get that the next time,’ and we’re not keeping track of our expenses, dollar by dollar. I should’ve known, but you know, we’re not together anymore so it wasn’t meant to be.”

Folks were shocked that a significant other would literally charge their partner for medicine.

“Picking up cold medicine on his way home is NOT super nice or sweet. That’s literally something you shouldn’t even have to ask for,” said another.

“I would do that for a coworker without asking for reimbursement. Like literally when someone calls out of work I ask if they need meds and either stop by with smth or DoorDash meds,” explained another.

A good relationship rule? Don’t charge your partner for their reasonably priced medication!