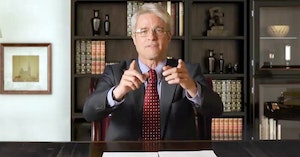 Saturday Night Live was back on April 25th, once again giving us a live Zoom broadcast and allowing us to peek in at their private homes. Despite technical challenges, they still managed to make viewers laugh with a topical opening sketch featuring Brad Pitt playing the distinguished Dr. Anthony Fauci. You can imagine what controversy Fauci was called upon to address. Trump’s most recent medical advice to the nation included injecting bleach and UV lights inside the body, so Fauci has a lot of work to undo.

Pitt starts by thanking “all the older women in America who have sent me supportive, inspiring, and sometimes graphic emails.”

He then reviews clips of Trump, including the one where Trump claimed the vaccine would be available “relatively soon.”

“Relative to the entire history of Earth? Sure, the vaccine is gonna come real fast,” Pitt says. “But if you were to tell a friend, ‘I’ll be relatively soon,’ and then showed up a year and a half later, then your friend may be relatively pissed off.”

Then we get to see the infamous clip of Trump claiming, “We have done an incredible job … It’s going to disappear one day, it’s like a miracle, it will disappear.”

Pitt’s Fauci responds, “A miracle would be great. But miracles shouldn’t be Plan A. Even Sully tried to land at the airport first.”

And now, a message from Dr. Anthony Fauci. #SNLAtHome pic.twitter.com/LYemNAWaAT

Trump then says in a clip, “Anybody that needs a test gets a test…and the tests are beautiful.”

Pitt says, “I don’t know if I would describe the test as beautiful, unless your idea of beauty is having a cotton swab tickle your brain. Also when he said everyone can get a test, what he meant was: almost no one.”

But when we get to the presser where Trump suggests injecting disinfectant, Pitt’s jaw just drops. Then he predicts he’ll soon be fired.

Eventually, Pitt breaks character to sincerely thank Fauci for his work as the director of the National Institute of Allergy and Infectious Diseases during an actual pandemic. According to the Hill, during an interview, on CNN’s New Day in early April, Fauci joked that if he had to pick someone to portray him on SNL it would be Brad Pitt. Honestly, making that happen is the very least we can do.