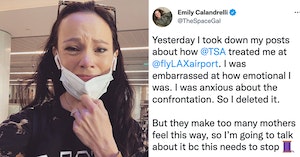 After a very intense past few weeks in which women have been thinking a lot about their relationship with motherhood and child-rearing, a California mom of a 10-week baby said she was humiliated after male security guards told her she could not take ice packs on an airplane. The ice packs were to keep her pumped breast milk cold during her flight.

And as you should know, we’re in the middle of a formula shortage, so breast milk is even more important to those who are able to produce it.

On Twitter, Emily Calandrelli said that she wanted to pump breast milk between going through airport security and boarding a five-hour flight. The ice packs would help keep the milk cold on the trip until she could get to her hotel and store it in a freezer. Gel ice packs are permitted on a plane in any form if they’re “medically necessary.”

“I think we could argue that pumping and feeding our child and doing this even when our child is not with us is absolutely medically necessary,” Calandrelli said, and she’s absolutely right. Breastfeeding mothers need to pump or nurse to avoid getting mastitis, which causes the breast to fill with milk and harden. This could potentially lead to an infection and even hospitalization.

Calandrelli, who is a frequent traveler because of her job, says she is used to bringing ice packs on the plane. Usually, she said, they “would let it go” and let her get on. But this time, the two male TSA agents said she wasn’t allowed. Calandrelli requested to speak to a possibly more empathetic female agent, but was greeted by a male supervisor.

“It was very clear that they just didn’t understand how breastfeeding worked,” Calandrelli said.

“I felt humiliated because I’m trying to explain to these grown men how my boobs work,” she added. “And I’m like, ‘This is your job. You guys should be trained to know this. I shouldn’t have to want to ask for a female agent who might know how to do your job better. That shouldn’t be the case.’ And so I felt ashamed like I had — I had done something wrong.”

A TSA spokesperson told Insider the agency took “all traveler concerns about our security checkpoint screening processes seriously and are committed to ensuring that every traveler is treated respectfully and courteously.”

As for Calandrelli, she did in fact have discomfort during her flight because guess what? Pumping on an airplane is pretty much impossible because you’re occupying that tiny, gross bathroom for at least 30 minutes.

“I’m trying to be a working mom and feed my kid and also not have an infection while I do it,” she said. “I felt nauseous and sweaty, and it was just like, ‘I need to empty these boobs out if there’s going to be a problem.'”