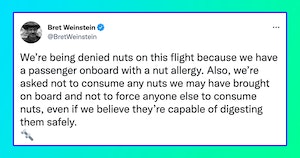 The past two years have made it astonishingly clear that too many Americans believe “freedom” is something they that allows them to do whatever they want, whenever they want, even if it’s at the expense of others. While we’ve seen this primarily when it comes to masks, guns, and yelling at people in customer service, this mindset also pops up in the most unexpected, minuscule places.

One recent example that sent Twitter into a mocking frenzy was when podcaster and former professor Bret Weinstein, who platformed false COVID information throughout the pandemic, was so perturbed about not being able to get free peanuts on a recent flight that he brought his outrage over the matter to the social media platform.

“We’re being denied nuts on this flight because we have a passenger onboard with a nut allergy,” he wrote. “Also, we’re asked not to consume any nuts we may have brought on board and not to force anyone else to consume nuts, even if we believe they’re capable of digesting them safely.”

At this point, it’s somewhat commonly understood that nut allergies can be extremely dangerous and even deadly for some people. As such, extreme caution when someone with such an allergy is present tends to be the norm, both for their personal safety and for others to avoid liability in case of an emergency.

And even if that weren’t the case, not being able to eat a tiny packet of peanuts for a couple of hours on public transportation is hardly worth even the energy to be even vaguely annoyed. Calling it a minor inconvenience even seems like overkill. It’s a pack of peanuts, Bret.

But as Weinstein opted to moan about this on Twitter, readers were ready to match his energy and mock him accordingly.

And while this whole thing seems silly, some pointed out that it’s indicative of a larger problem in modern society.

After getting relentlessly dragged for the duration of his flight, Weinstein did offer up a strange apology, but not without getting up in arms about people making fun of him first.

In other words, the usual request of grace and understanding for me, but not for thee!