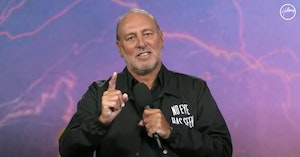 The founder of the Hillsong megachurch, Brian Houston, has been charged by Australian authorities for concealing alleged child sexual abuse by his pastor father in the 1970s.

According to the Washington Post, Houston denies the charges and proclaims he will fight them at an expected court date coming in October.

“I vehemently profess my innocence … and I welcome the opportunity to set the record straight,” the pastor said in an emailed statement Friday.

The Post‘s account goes on to note that “charges are the result of a police investigation launched in 2019 into reports that a church leader had ‘knowingly concealed information relating to child sexual offenses.'”

“Police will allege in court the man knew information relating to the sexual abuse of a young male in the 1970s and failed to bring that information to the attention of police,” officials stated.

The Daily Beast added that Houston has “faced scrutiny over the case since 2014, when Australia’s royal commission into child sexual abuse heard that pastor Frank Houston—who died in 2004, before the shocking allegations against him were made public—abused multiple boys in the 1970s.”

That story added that he could face five years in prison if convicted.

Hillsong will be familiar to God readers, as the megachurch — whose followers include Justin Bieber and Chris Pratt — tends to make headlines.

Just last week, God reported Hillsong member and anti-vaxxer Stephen Harmon died from COVID-19 after mocking the pandemic. That included tweeting, “If you’re having email problems, I feel bad for you, son. I got 99 problems but a vax ain’t one!”

And, back in December, the revelation that the Guardians of the Galaxy character that Pratt portrays is bisexual led to rampant online speculation about how the actor would square that with Hillsong’s conservative views.

The Post article also noted that “the scandal also threatens to entangle Australian Prime Minister Scott Morrison, who counts Houston as a personal friend. Morrison, who leads the center-right Liberal Party, had asked for Houston to be invited to a White House state dinner President Donald Trump held in the prime minister’s honor in 2019. The request was not granted, but Houston did pray for Trump in a White House visit that December.”

Trump appeared to return the favor with his equivalent of prayer — a tweet, via the official White House account, as archived via the account chronicling the former president’s reign.

Rachael Denhollander, an attorney whose Twitter bio describes herself as “Part of the Army that took down Larry Nassar,” remarked on the case.

“I firmly believe this is the tip of the iceberg for Hillsong and Brian Houston,” she tweeted. “That he has finally been charged is a small step in the right direction, but it has taken decades of work to get this far, and it shouldn’t have.”